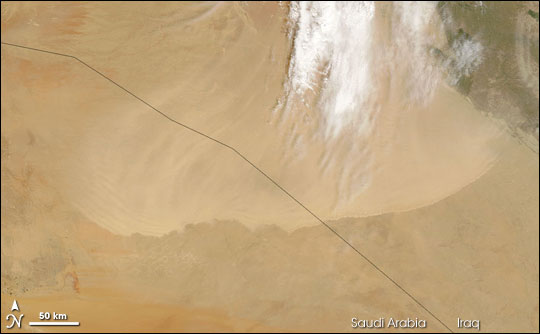 For a satellite sensor to capture a wall of dust over a wide region is relatively rare, but this image captures a dust wall stretching across roughly 450 kilometers (280 miles). In this image, the buff-colored storm advances southward over slightly darker terrain. On its leading edge, the dust wall is distinct. To the north, the dust plume becomes more amorphous.

Terra captured this image at 08:00 UTC on April 27. By the time the Aqua satellite passed over the region about an hour and a half later, the storm had advanced noticeably, as a comparison of satellite passes shows.