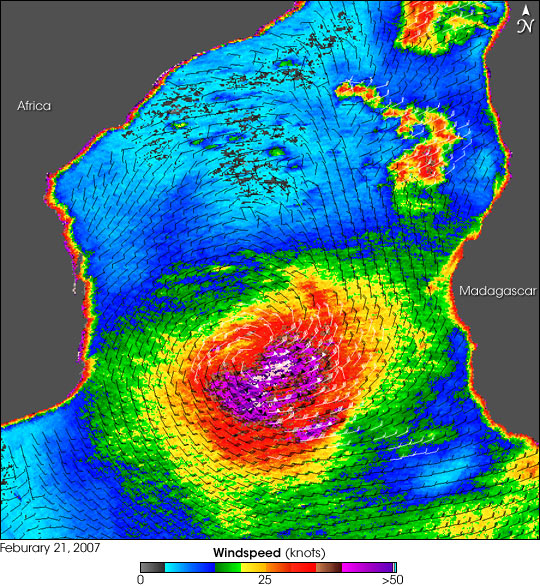 Cyclone Favio was closing the gap between Madagascar and mainland Africa on February 21, 2007, preparing to strike Mozambique in coming days. The Joint Typhoon Warning Center forecast issued at 12:00 UTC (2:00 p.m. Mozambique local time) on February 21 indicated that Favio had sustained wind speeds of 100 knots (about 185 kilometers/hour, 115 miles/hour), with gusts up to 125 knots (about 232 kilometers/hour; 144 miles/hour), which made it a Category 3 storm. The forecast called for the storm to weaken before making landfall within 24 hours, but the impacts were still expected to be severe. The country was already water-logged from heavy rains associated with the onset of the monsoon, and severe flooding along the Zambezi River in mid-February killed dozens of people and forced more than a hundred thousand people to evacuate, according to reports from the International Federation of Red Cross and Red Crescent Societies posted online by ReliefWeb.

This data visualization shows Cyclone Favio in the middle of the Mozambique Channel between the island of Madagascar and Africa. The data were obtained by NASA’s QuikSCAT satellite on February 21, 2007, at 6:38 a.m. local time (3:38 UTC). The image depicts wind speed in color and wind direction with small barbs. White barbs point to areas of heavy rain. Favio appears as a well-formed spiral of winds centered around a strong eye where winds were calmer. This pattern is typical of tropical cyclones. Since the storm is in the Southern Hemisphere, the Coriolos force, which gives all hurricanes and cyclones their spin, turns the storm clockwise, the opposite direction to hurricanes and typhoons which form in the Northern Hemisphere.

Tropical cyclones, however, are difficult to measure. To relate the radar energy returned to the sensor to actual wind speed, scientists compare measurements taken from buoys and other ground stations to data the satellite acquired at the same time and place. Because the high wind speeds generated by cyclones are rare, scientists do not have corresponding ground information to know how to translate data from the satellite for wind speeds above 50 knots (about 93 km/hr or 58 mph). Also, the unusually heavy rain found in a cyclone distorts the microwave pulses in a number of ways, making a conversion to accurate wind speed difficult. Instead, the scatterometer provides a nice picture of the relative wind speeds within the storm and shows wind direction.