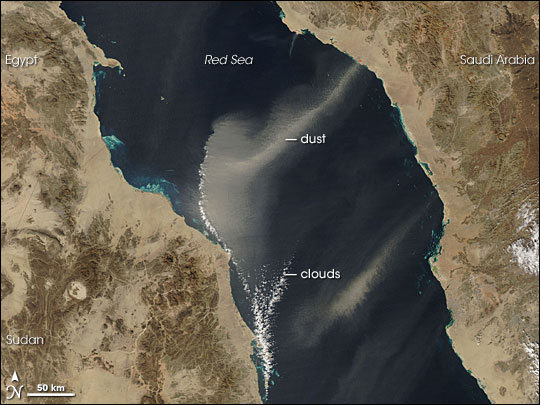 On December 17, 2006, a plume of dust from Saudi Arabia crossed the Red Sea toward Sudan. The Moderate Resolution Imaging Spectroradiometer (MODIS) flying onboard NASA’s Aqua satellite took this picture the same day. In this image, the northern plume looks like a funnel cloud laid on its side—a thin band that spreads out in the west. Tiny white dots of clouds fringe the plume along its western edge. These clouds could have formed along the edge of an air mass that prevents the plume from pushing farther west.

At the origin of the northern plume is a red dot indicating a hotspot—an unusually warm area detected by MODIS. Although the hotspot suggests the plume is smoky, its color so closely matches the ground it came from that it is probably dust, not smoke. A smaller plume, also likely comprised of dust, appears to the south. 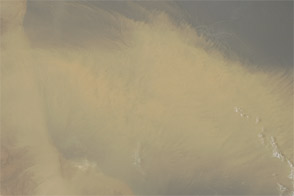