Fires in Northern Territory and Queensland 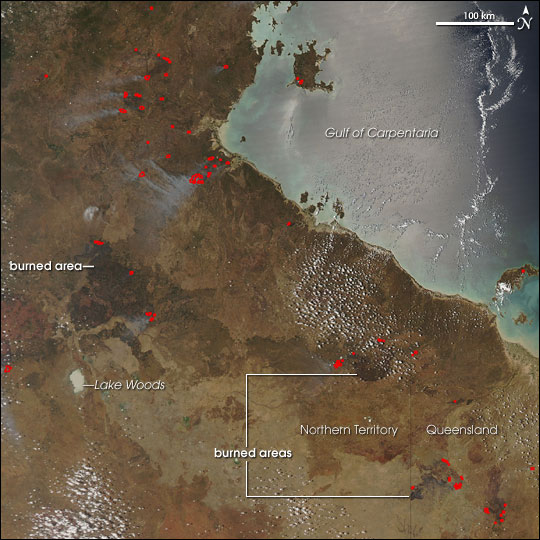 In late spring 2006, Australia appeared to be in the midst of an active fire season. Throughout the month of November, the Moderate Resolution Imaging Spectroradiometers (MODIS) on NASA’s Terra and Aqua satellites captured numerous images of fires burning in northern Queensland’s Cape York Peninsula, southern Queensland, New South Wales, and northwestern Australia. This image shows fires and large burn scars near the border of Northern Territory and Queensland on November 27, 2006. Places where Aqua MODIS detected actively burning fires are marked in red. Burned areas appear deep brown compared to the tan colors of the tropical savannas that dominate the landscape of the region.

Fires, both natural and human-caused, have been part of the ecosystem here for hundreds, probably thousands of years. Traditional Aboriginal land owners, as well as private and government land owners, use fire to manage agricultural and natural ecosystems in the area. Use of prescribed fire early in the season reduces the risk of more severe fires later in summer.

The high-resolution image provided above has a spatial resolution of 250 meters per pixel. The MODIS Rapid Response System provides twice-daily images of Australia at additional resolutions via a clickable map.