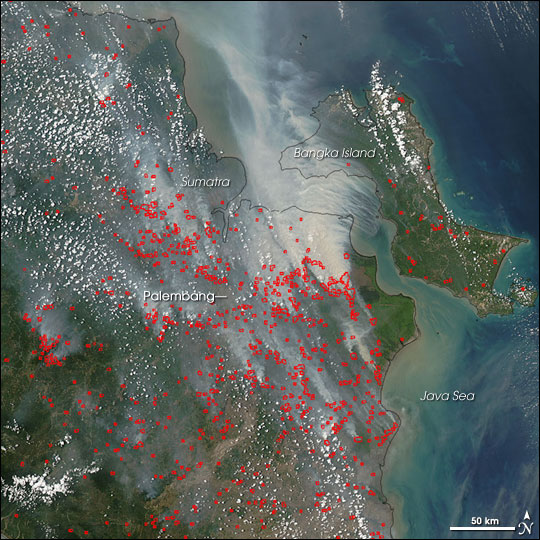 On the Indonesian island of Sumatra, the low-lying, eastern plain is home to swampy forests whose floors are covered with a thick layer of peat—dead, but not decayed vegetation that is often submerged in the wetter parts of the year. Large tracts of this forest have already been cleared for timber and agricultural activities, and the remaining forests are subject to intense human pressures. Fires are a common occurrence late in the year on the island. In the dry season, forest fires often start from agricultural fires that escape control. The fires burn not only trees and above-ground vegetation, but also dried-out peat, creating massive amounts of haze.

This image from the Moderate Resolution Imaging Spectroradiometer (MODIS) on NASA’s Aqua satellite on September 27, 2006, shows scores of fires (locations marked with red dots) burning in southeastern Sumatra. The island’s largest city, Palembang, is shrouded in haze, which spreads in a thick white cloud to the north.

The high-resolution image is provided at MODIS’ maximum spatial resolution (level of detail) of 250 meters per pixel. The MODIS Rapid Response System provides this image at additional resolutions.

In late September and October 2006, scores of fires were burning in southeastern Sumatra. The island's largest city, Palembang, was shrouded in haze.