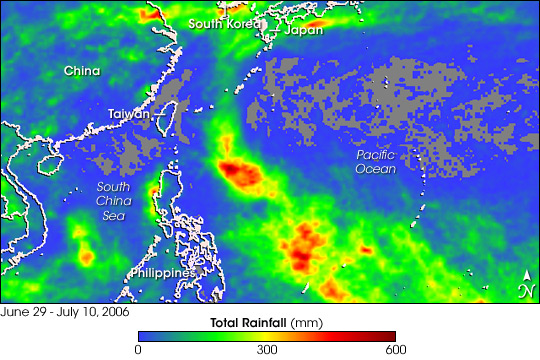 As of July 11, 2006, at least 30 people in China and 5 in Korea had died as a result of flooding and mudslides caused by Typhoon Ewiniar. The storm began as a tropical depression on June 30, 2006, southeast of Palau in the northern West Pacific. Ewiniar tracked generally north-northwestward before turning north to pass east of the Philippines and Taiwan. The storm made landfall in South Korea on July 10. Ewiniar was rated a Category 4 typhoon at its peak, with maximum sustained winds estimated at 240 kilometers per hour (150 miles per hour) while it was east of the Philippines on July 5. Ewiniar then slowly weakened as it passed by the coast of China before striking the Korean Peninsula as a tropical storm.

Rainfall totals are shown here for the period June 29 to July 10, 2006, for the western Pacific region. The highest rainfall totals trace out Ewiniar’s path, with maximum amounts around 600 millimeters or more (shown in red). These heavy amounts occurred offshore. The east-west oriented bands of moderate to isolated heavy rainfall (shown in green and red) over the east coast of China and southeast of Japan are associated with another weather system unrelated to Typhoon Ewiniar. That system brought rain to the same area during this period.

The rainfall analysis above is from the Multi-satellite Precipitation Analysis, which uses data from NASA’s Tropical Rainfall Measuring Mission (TRMM) satellite to calibrate precipitation estimates. This product was developed by the precipitation research team in the Laboratory for Atmosphere at NASA Goddard Space Flight Center. TRMM is a joint mission between NASA and the Japanese space agency, JAXA.

Typhoon Ewiniar formed in the western Pacific on June 29, 2006, a hundred miles south of the Yap Islands in the Federated States of Micronesia.