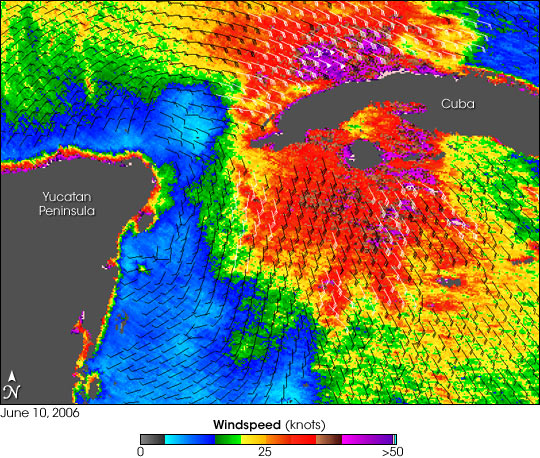 This data visualization shows Alberto in the early stages of formation. The image depicts wind speed in color and wind direction with small barbs. White barbs point to areas of heavy rain. The highest wind speeds, shown in purple, are offset some distance from the center of the storm, which is not typical. The data were obtained by NASA’s QuikSCAT satellite on June 10, 2006 at 23:40 UTC (7:40 p.m. local time). At that time, Alberto had just achieved tropical storm status. The wind direction barbs show that Alberto’s center, around which the winds swirled, was located just off the Yucatan Peninsula, even though the strongest winds were over western Cuba.

QuikSCAT employs a scatterometer, which sends pulses of microwave energy through the atmosphere to the ocean surface, and measures the energy that bounces back from the wind-roughened surface. The energy of the microwave pulses changes depending on wind speed and direction, giving scientists a way to monitor wind around the world. This technique does not work over land, which is why there are no measurements over Cuba and the Yucatan in the image shown here.