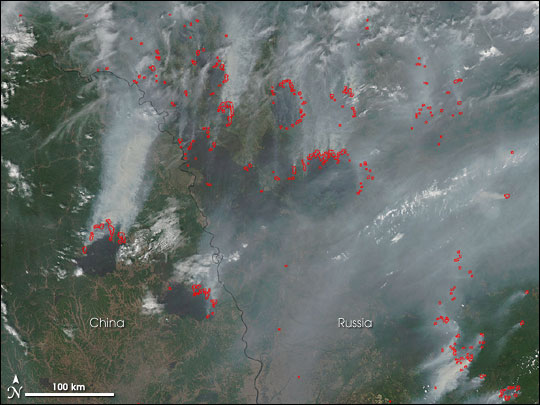 Huge forest fires raged across Russia’s Amur region and China’s Heliongjiang region on May 30, 2006. The border between the two countries is made by the Amur River (Heliong Jiang), and massive, smoky fires were burning on both sides. In this image from the Moderate Resolution Imaging Spectroradiometer (MODIS) on NASA’s Aqua satellite, the locations of actively burning fires that MODIS detected are marked in red. Huge columns of smoke spread from many of the fires. Dark, charcoal-colored patches show the areas burned. Vegetation is green, and bare (or sparsely vegetated) ground is tan.

According to reports from the Russian news agency ITAR-TASS, forest fire activity in spring 2006 has been much greater than it was in 2005. Thirteen hundred fires broke out in the last week of May alone, with emergency crews able to put out about half of them in a day.

The high-resolution image provided above has a spatial resolution of 250 meters per pixel. The MODIS Rapid Response System provides this image at additional resolutions. They also provide a false-color version of the image that uses MODIS’ observations of shortwave and near-infrared energy to penetrate the smoke and highlight burn scars.

Huge fires were burning north and south of the Amur River on May 30, 2006.