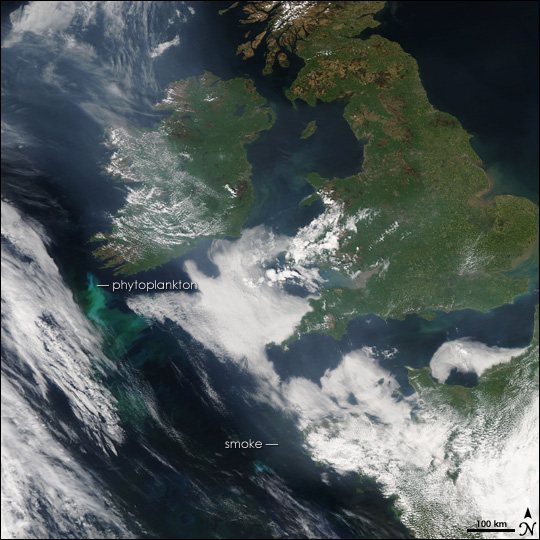 Although skies may have been mostly cloud-free over Ireland and the United Kingdom on May 10, 2006, a pall of haze dimmed the day. The white haze drifts from the Atlantic Ocean northwest of Ireland, over the island country, and southeast over the Celtic Sea and the English Channel in this photo-like image taken by the Moderate Resolution Imaging Spectroradiometer (MODIS) on NASA’s Aqua satellite. The smoke is coming from hundreds of fires burning in western Russia, most of which are probably agricultural fires. The fires have been burning since late April, and in that time, the smoke has drifted northwest over Scandinavia, the Norwegian Sea, Iceland, and the Atlantic Ocean before curving south to blanket Ireland.

Unrelated to the smoke, the ocean southwest of Ireland is brilliant green-blue where a large phytoplankton bloom is growing. Phytoplankton are microscopic plants that grow in the sun-lit surface waters of the ocean. When large colonies develop, the blooms are visible from space by the bright color they lend the normally dark water.

A river of smoke from fires in western Russia hung over the northern oceans and Northern Europe in early May 2006.