Floods on the Songhua River in Northern China 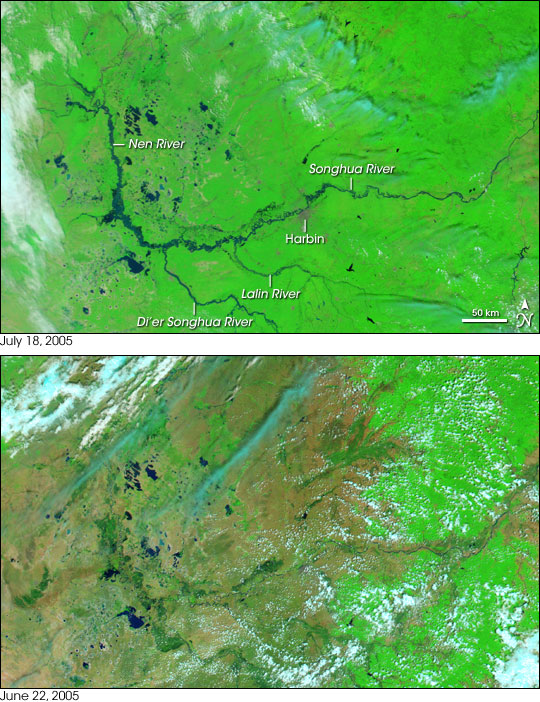 Summer rains have filled China’s rivers, triggering floods through much of the country. Summer floods are normal in China, but that doesn’t decrease their impact. By July 9, floods had killed more than 560 people across China, displaced 2.5 million, and caused damage costing about 2.77 billion U.S. dollars, according to multiple media reports. The most serious flooding has been in southern China, but the Moderate Resolution Imaging Spectroradiometer (MODIS) captured the top image of flooding in northern China along the Songhua and its tributaries on July 18, 2005. The lower image, acquired on June 22, 2005, shows the region before it was inundated with heavy rains.

The image shows the swollen Nen River curving east to meet the flooded Songhua River. The Di’er Songhua and Lalin rivers, also flooded, flow into the Songhua from the south. Without the dark blue flood waters, only the course of the Songhua is clear in the lower image. In both images, clouds are light blue and white, vegetation is bright green, and bare earth is tan.

The floods along the Songhua affected 1.27 million people, destroyed 5,287 houses and 354,900 hectares of crops, reports the Dartmouth Flood Observatory.

Summer rains have filled China's rivers, triggering floods through much of the country.