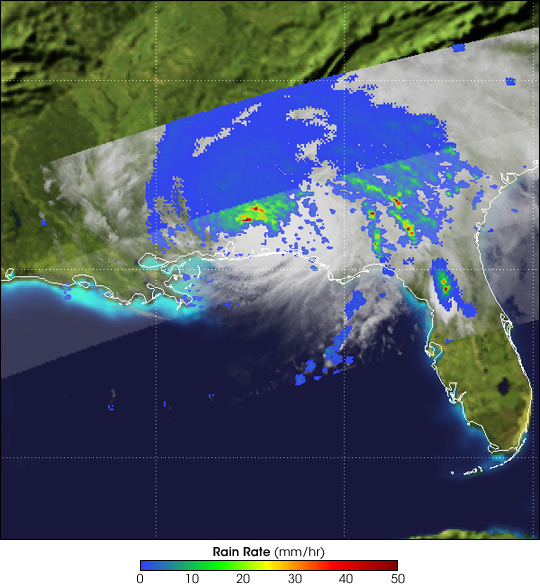 After striking Cuba on July 8, 2005, Hurricane Dennis had lost strength from passing over land. However in the Gulf of Mexico, it recovered and strengthened into a powerful Category 4 storm once again during the early morning hours of July 9th, with maximum sustained winds back up to 125 knots (144 mph). Fortunately for residents in the Florida panhandle, Dennis weakened just before making landfall due to the storm’s passage over slightly cooler water. Dennis made landfall around 3:30 p.m. CDT on July 10th just east of Pensacola, Florida, as a Category 3 storm with maximum sustained winds of 120 mph.

This image shows Hurricane Dennis at 22:41 UTC (5:31 p.m. CDT) on July 10th, just after the storm had made landfall. The eye is already open to the south as hurricanes tend to quickly weaken over land, and almost all of the rain is occurring north and east of the center (green and blue areas). Rain rates in the center of the swath are from the TRMM Precipitation Radar (PR), the only radar measuring precipitation from space. Rain rates in the outer swath are from the TRMM Microwave Imager (TMI). The rain rates are overlaid on infrared (IR) data from the TRMM Visible Infrared Scanner (VIRS). This image shows a rejuvenated Dennis with maximum sustained winds back up to 90 knots (104 mph). The eye is well formed and contains intense 2-inch-per-hour rain rates (dark red area) in the northeastern part of the eyewall, an indication that strong heating is occurring in the core and is reinvigorating the system.

The Tropical Rainfall Measuring Mission (TRMM) satellite has been monitoring the progress of Dennis since it formed in the eastern Caribbean. Launched in 1997 to measure rainfall over the Tropics, TRMM continues to prove itself as an excellent platform for observing tropical cyclones.