An Atmospheric River of Dust 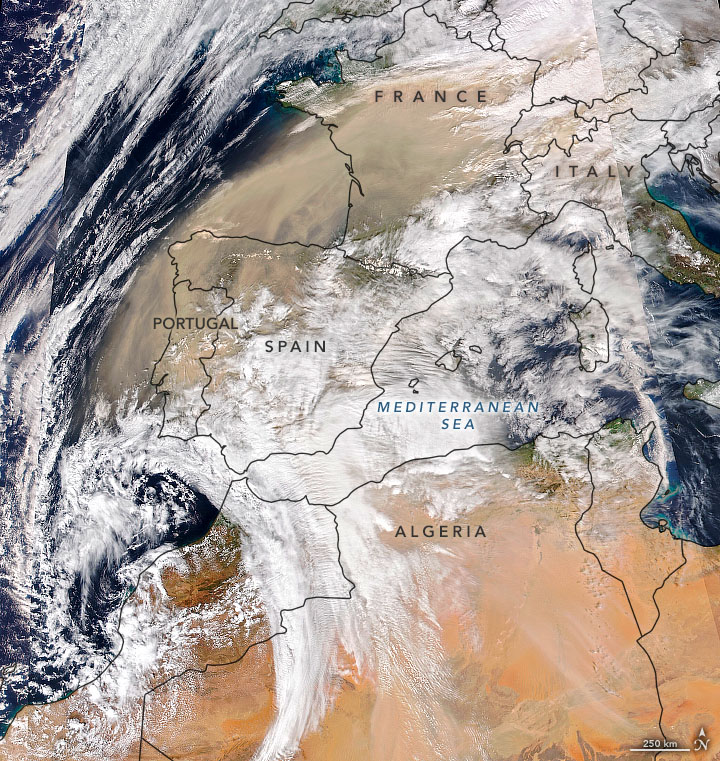 On March 15, 2022, a plume of Saharan dust was blown out of North Africa and across the Mediterranean into Western Europe. The dust turned skies orange, blanketed cities, impaired air quality, and stained ski slopes.

The plume was driven by an atmospheric river arising from Storm Celia, which brought strong winds, rain, and snow to the Canary Islands. Atmospheric rivers, normally associated with extreme moisture, can also carry dust.

“You can think of them as the confluence of a dust river and a water vapor river within a single storm environment,” said Bin Guan, an atmospheric scientist at NASA’s Jet Propulsion Laboratory and the University of California, Los Angeles. “The same atmospheric dynamics that give rise to a water vapor river—specifically strong winds—can act to pick up and transport dust as the storm moves across desert areas.”

Over the past four decades, 78 percent of atmospheric rivers over northwestern Africa have led to extreme dust events over Europe, according to research by Guan and colleagues. Such “aerosol atmospheric rivers”—a term recently introduced in a NASA-led study that refers to narrow, elongated regions of extreme aerosol mass transport—can play an important role in climate and air quality around the world.

The image above, acquired on March 15 by the Visible Infrared Imaging Radiometer Suite (VIIRS) on the NOAA-20 spacecraft, shows the dust plume moving out of Algeria and over the Iberian Peninsula. Forecasters from the Copernicus Atmosphere Monitoring Service indicated that most of the dust reaching Europe would likely be concentrated over Spain, Portugal, and France, which will see degraded air quality. 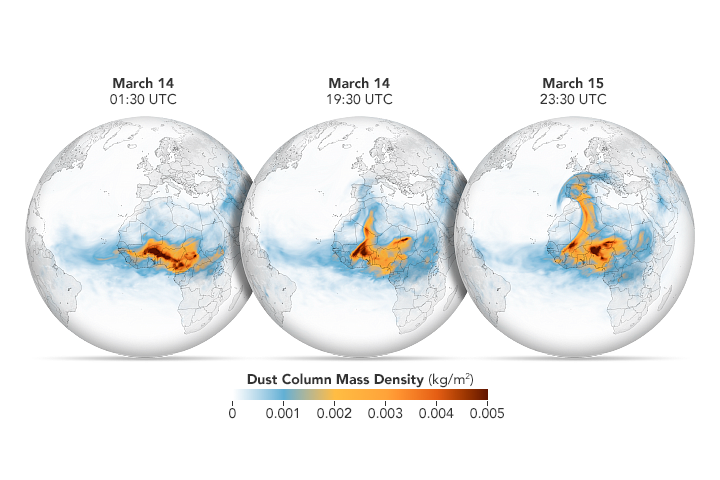 The maps above show a model of the dust plumes blowing across North Africa and into Europe on March 14 and 15. The model was generated by the Goddard Earth Observing System Model, Version 5 (GEOS-5), a global atmospheric model that uses mathematical equations to represent physical processes. Measurements of physical properties like temperature, moisture, and wind speeds and directions are routinely folded into the model to keep the simulation as close to observed reality as possible.

Each year, more than 100 million tons of dust blow out of North Africa, lofted from the Sahara Desert by strong seasonal winds. At least a few times a year, strong and persistent winds from the south drive Saharan dust north toward Europe.

The dust plays a major role in Earth’s climate and biological systems, absorbing and reflecting solar energy and fertilizing ocean ecosystems with iron and other minerals that plants and phytoplankton need to grow.

But such events can decrease the amount of sunlight reaching the surface through reflection and absorption, affect cloud formation, and decrease temperatures. Dust can degrade air quality and have negative health effects.

“Besides polluting the air, the dust can darken the snowpack and lead to more rapid snowmelt compared to a pristine atmospheric river,” Guan said.

In a 2021 dust event, Guan and colleagues found that dust deposition led to snow darkening in the Alps, decreasing the reflectance, or albedo, of the snow by 40 percent and warming the surface. Together, this reduced the snow depth in the Alps by half in less than a month.

The full effects of this year's storm have yet to be seen but compared to the 2021 event, this storm seems to be carrying more dust than water vapor, Guan said. “The water vapor river over northern Africa does not appear to be particularly strong compared to last year’s—it’s an arid region, after all,” he said. “The dust river is likely more intense.” 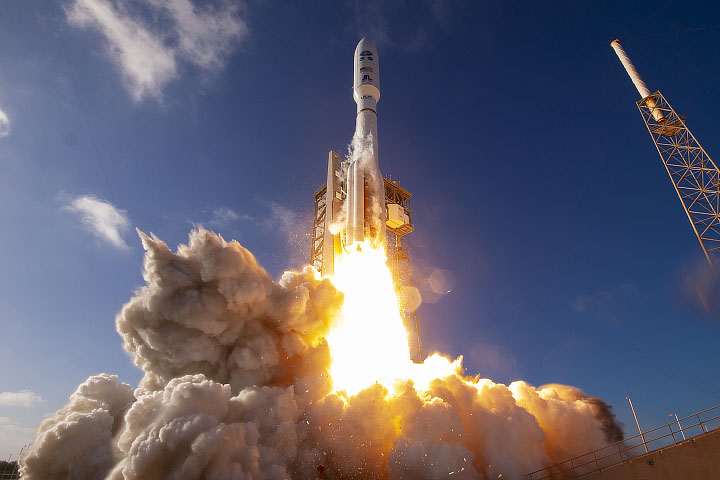 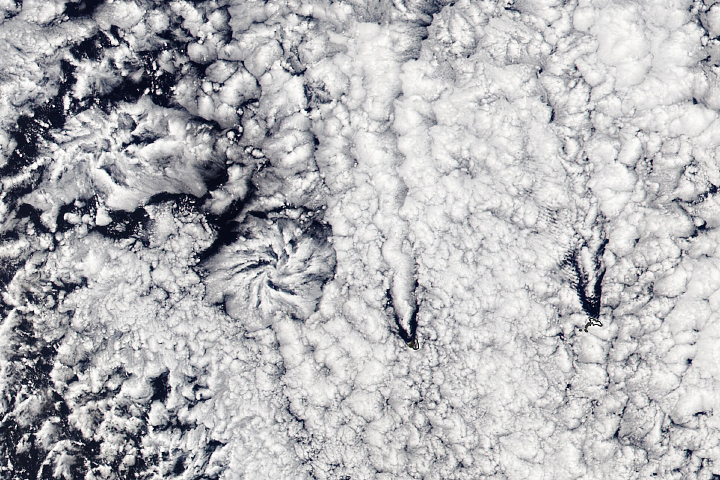 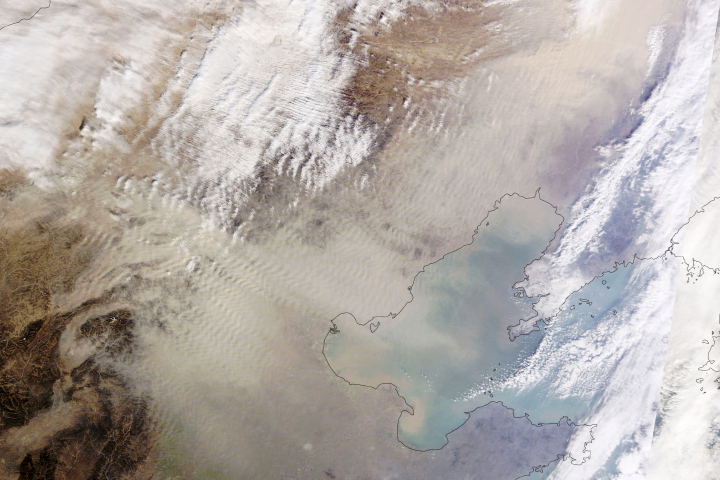 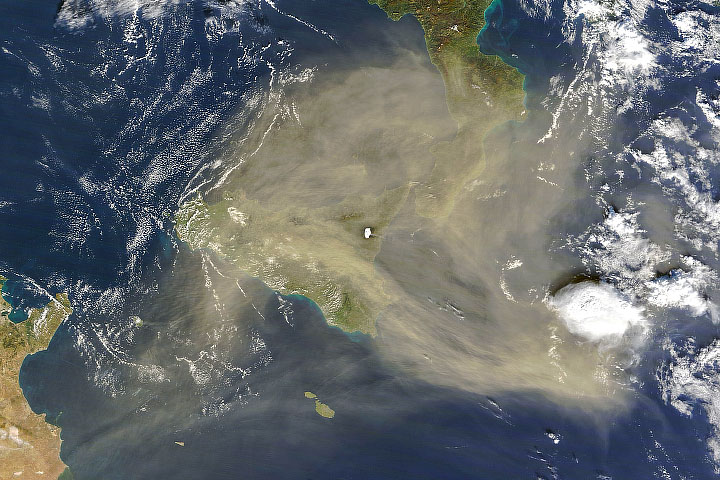 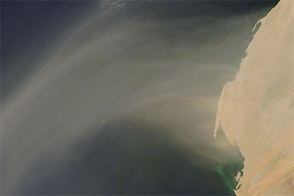 Captured October 8, 2012, this image shows a dust plume spanning hundreds of kilometers off the western coast of Africa.