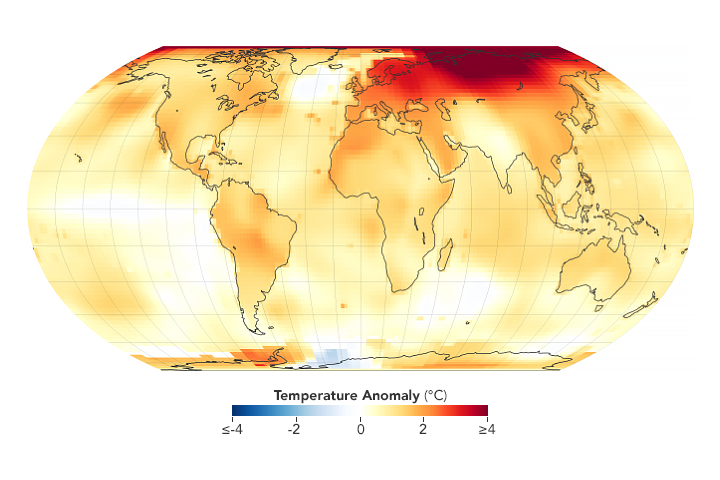 Earth’s global average surface temperature in 2020 tied with 2016 for the warmest year on record, according to an analysis by NASA.

Continuing the planet’s long-term warming trend, the globally averaged temperature in 2020 was 1.02 degrees Celsius (1.84 degrees Fahrenheit) warmer than the baseline 1951–1980 mean, according to scientists at NASA’s Goddard Institute for Space Studies (GISS). The year was slightly warmer than 2016 but within the margin of error of the analysis, making the years effectively tied.

“The last seven years have been the warmest seven years on record, typifying the ongoing and dramatic warming trend,” said GISS Director Gavin Schmidt. “Whether one year is a record or not is not really that important; the important things are long-term trends. With these trends, and as the human impact on the climate increases, we have to expect that records will continue to be broken.”

The map above depicts global temperature anomalies in 2020. It does not show absolute temperatures; instead, it shows how much warmer or cooler each region of Earth was compared to the baseline average from 1951 to 1980. The bar chart below shows this year in the context of the past 140 years in the modern temperature record. The values represent surface temperatures averaged over the entire globe for the year.

A separate, independent analysis by the National Oceanic and Atmospheric Administration (NOAA) concluded that 2020 was the second-warmest year in their record, behind 2016. NOAA scientists use much of the same raw temperature data in their analysis, but have a different baseline period (1901-2000) and methodology. They noted that 2020 was the 44th consecutive year with global land and ocean temperatures above the 20th-century average.

Scientists from Europe’s Copernicus program also have 2020 tying 2016 as the warmest year on record, while the UK Met Office ranked 2020 as the second-warmest.

The animation below shows the seasonal cycle in global temperature anomalies for every month since 1880. Each line shows how much the global monthly temperature was above or below the global mean of 1980–2015. These seasonal anomalies are drawn from the Modern-Era Retrospective analysis for Research and Applications, version 2 (MERRA-2), a model run by NASA’s Global Modeling and Assimilation Office.

Like all scientific data, these temperature findings contain a small amount of uncertainty—in this case, mainly due to changes in weather station locations and temperature measurement methods over time. The GISS temperature analysis (GISTEMP) is accurate to within 0.1 degrees Fahrenheit, with a 95 percent confidence level for the most recent period.

While the long-term trend of warming continues, a variety of events and factors contribute to any particular year’s average temperature. The largest source of year-to-year variability in global temperatures typically comes from the El Nino-Southern Oscillation (ENSO), a naturally occurring cycle of heat exchange between the ocean and atmosphere. While the year ended in a La Niña (cool) phase of ENSO, it started in a slightly positive (warm) phase, which marginally increased the average overall temperature. The cooling from the negative phase is expected to have greater influence on 2021.

“The previous record warm year, 2016, received a significant boost from a strong El Niño,” Schmidt said. “The lack of a similar assist from El Niño this year is evidence that the background climate continues to warm due to greenhouse gases.”

Parts of Earth are warming faster than others, with warming trends most pronounced in the Arctic. According to Schmidt, the region has been warming more than three times as fast as the rest of the globe over the past 30 years. At the same time Arctic sea ice has been declining by about 13 percent per decade, which causes the region to reflect less sunlight (lower albedo). In turn, the Arctic Ocean absorbs more heat and causes temperatures to rise further still. This phenomenon is known as Arctic amplification.

NASA Earth Observatory images by Joshua Stevens, based on data from the NASA Goddard Institute for Space Studies. Story derived from NASA and NOAA press releases by Michael Carlowicz. 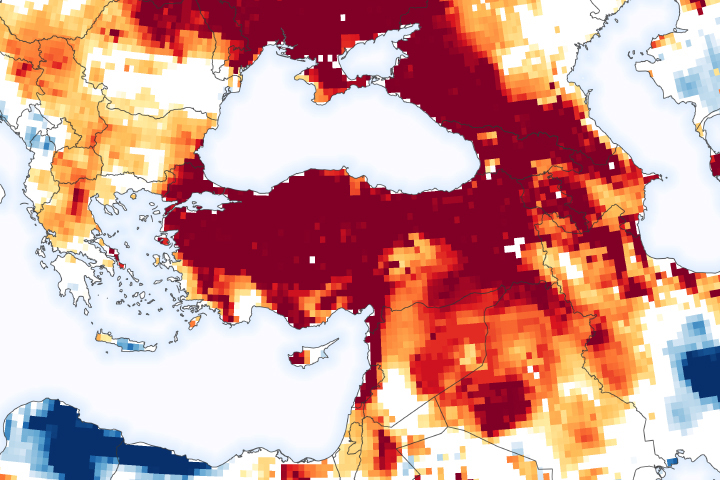