The Caspian Sea is the world’s largest landlocked body of water. Stretching 1,200 kilometers (750 miles) from north to south, it intersects five countries in Asia and Europe. The lake passes through several geological landscapes, creating a beautiful array of visual textures.

The first inset (top-left) shows ice forming around the edges of the lake. In the winter, ice typically forms in the north, while central and southern areas remain ice free. The contrast is a result of differences in water depth and salinity. In the north, the lake is shallower and fresher than the south. Freshwater freezes at a slightly warmer temperature than salt water, allowing the ice to form more readily once the temperatures start to drop. The shallower depth also allows water to cool more quickly through the water column. 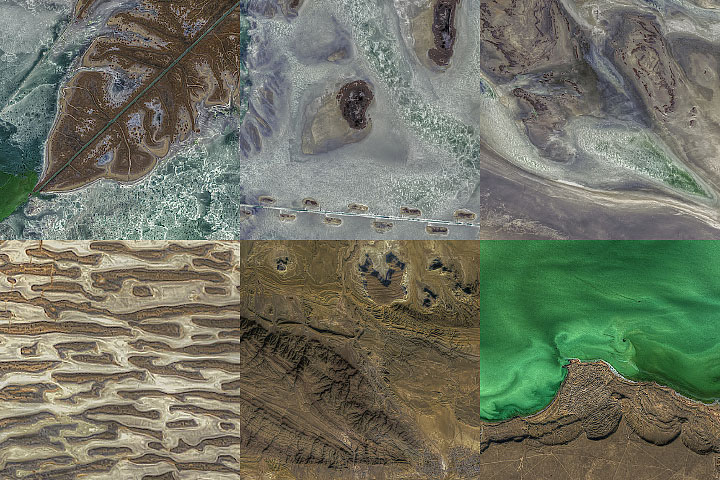 The second and third images depict areas around Dead Kultuk Bay. Since the 1990s, water levels in the Caspian Sea have risen and obscured the bay’s coastlines. As a result, water now reaches farther into the bay and creates waterlogged marshes. The surrounding area also contains oil fields.

The fourth image (bottom-left) shows the Buzachi Peninsula, south of Dead Kultuk. The peninsula is a low-lying desert environment, with some areas 30 meters (100 feet) below sea level. The northern part of the peninsula contains many salt marshes and salt lakes. The area has also become a popular site for oil and gas drilling.

The fifth image shows part of the Mangyshlak Peninsula, which is also very dry, low in elevation, and contains little vegetation. It is mostly uninhabited desert, but it includes Mount Otpan-tau, the highest point in Mangystau province at 530 meters (1,700 feet) above sea level. Today, a historical and spiritual complex sits atop the mountain. Legend holds that in the past, fire was lit at the peak to warn locals about a potential attack or danger.

The sixth image shows green swirls in the Caspian Sea, which contrasts with the lake’s typically bluer waters. The swirls could be phytoplankton blooms, which occur in the Caspian Sea when there is adequate sunlight and nutrients. The blooms are usually harmless and can be an important food source for marine life. 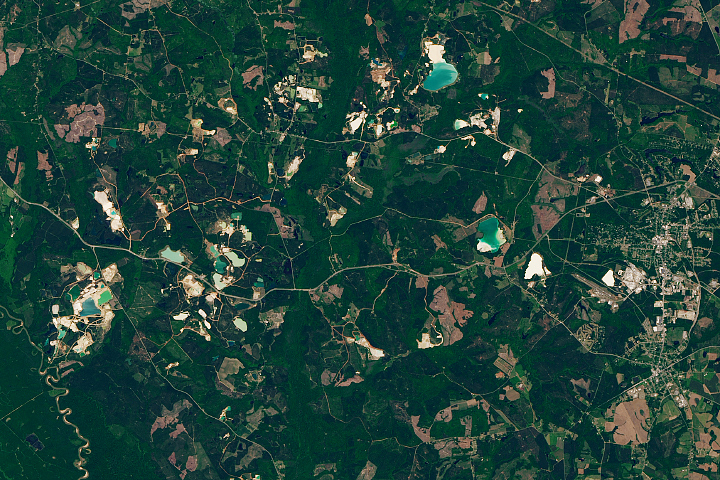