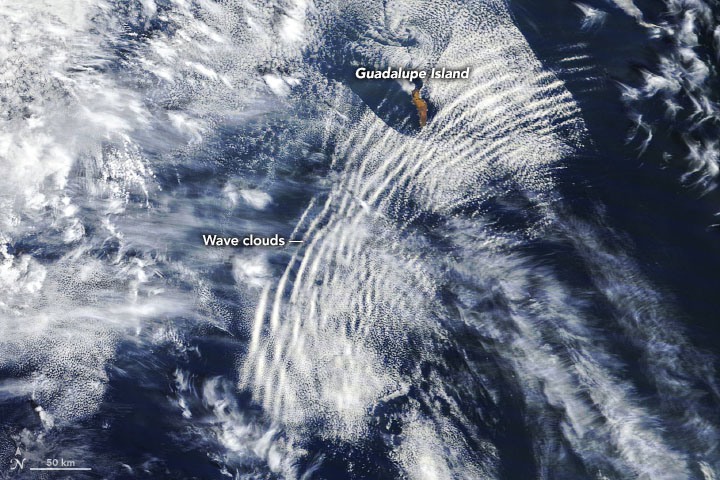 When the Moderate Resolution Imaging Spectroradiometer (MODIS) on NASA’s Terra satellite captured this natural-color image on October 4, 2020, a series of undulating cloud bands—an undular bore—rippled over the Pacific Ocean near Baja California.

Wave clouds (sometimes called undulatus or billow clouds) like these are the product of atmospheric gravity waves. They typically form when something forces a mass of air upward. The air cools as it rises and, if there is enough moisture in the air, the water condenses and forms clouds. After the air has passed over the obstacle, it typically sinks downward again. The air warms as it descends, preventing clouds from forming. But like ripples on a pond, the initial disturbance creates a propagating wave that continues to spread, causing air to rise and drop again and again until the wave dissipates. The end result is long lines of clouds that mark the crests of the waves, with cloud-free areas between them that correspond to the troughs of the waves.

Wave clouds often form when mountains or islands force the flow of air upward. But in this case, the undular bore was likely caused by masses of cool and warm air colliding, with the cool air pushing the warmer air upward. As the group of wave clouds passed Guadalupe Island, notice how cross-currents in the air flow created by the island’s rugged terrain made a pocket of air to the west less amenable to cloud formation.

“Guadalupe Island often creates some awesome von Karman vortex streets, but making the cloud bands of an undular bore briefly disappear is one of its more impressive tricks,” said Scott Bachmeier, a meteorologist with the Cooperative Institute for Meteorological Satellite Studies at the University of Wisconsin-Madison.

These were not the only eye-catching wave clouds along North America’s Pacific Coast in recent days. As Bachmeier also pointed out, northwesterly winds flowing past the rugged shoreline of Point Reyes, California, generated a series of striking cloud bands on October 3, 2020, that were similar to bow waves. 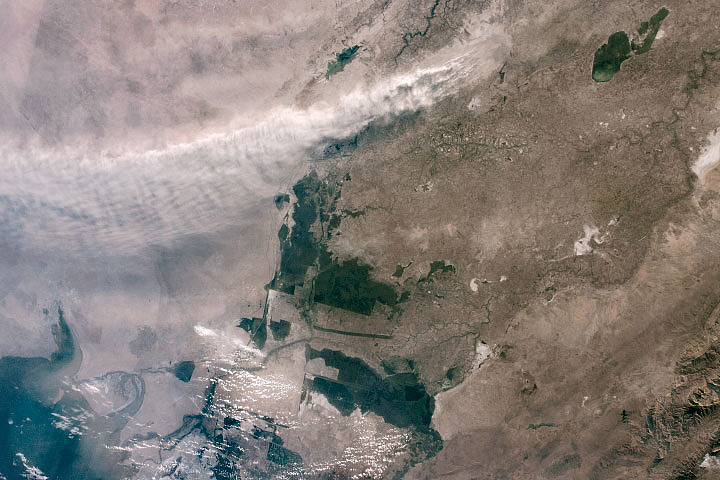