In the past three decades, several of Iraq’s largest lakes have experienced fluctuating water levels due to droughts, dam management, and conflict. Two lakes in particular—Milh and Habbaniyah—experienced substantial declines in water levels and lost much of their reputation as bustling resort areas.

Now satellite imagery shows the two lakes are refilling. The natural-color images above show Lake Milh on August 16, 2018 (left) compared to August 21, 2020 (right). The red color is most likely due to the presence of algae and bacteria with red pigments; a similar phenomenon occurs in a lake in nearby Iran. The images were captured by the Operational Land Imager (OLI) on Landsat 8. Older satellite imagery suggests that the lake has not appeared this full since 2009, although 2015 came close.

Lake Milh, also known as Lake Razzaza, was completed in the 1970s to receive excess water from Habbaniya Lake during flood season. Milh was one of Iraq’s largest lakes and a popular recreation spot in the 1980s. The islands within the lake served as important breeding areas for many birds, such as the flamingo.

But due to droughts and closures of connecting waterways, water levels began to dwindle. The lake’s changing water levels and increasing salinity caused several fish species to disappear. Tourism also decreased as the lake and nearby communities suffered through drought and war. 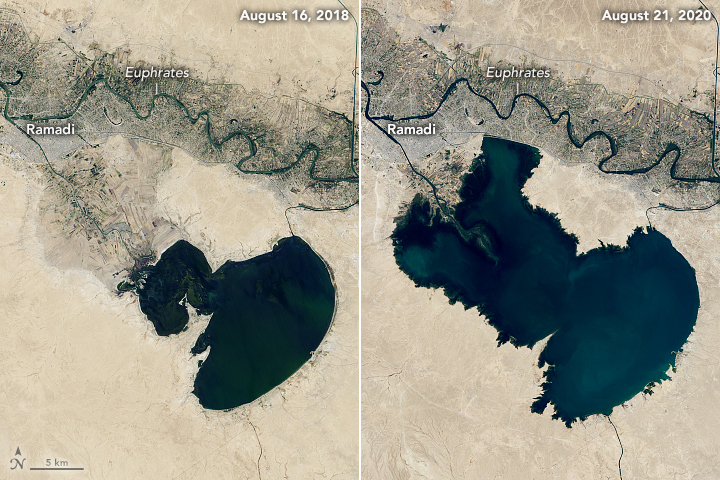 The image above shows Habbaniya Lake (also known as Lake Ramadi), as observed by Landsat 8. In the 1980s, Habbaniya was also a popular tourist destination. However, the resort suffered after several conflicts in the 1990s and 2000s. Companies have since tried to revive the vacation spot by rebuilding facilities.

The reasons for the recent increases in the water levels are not clear. Preliminary satellite precipitation data analysis and data from ground stations do not show obvious flooding in the vicinity of the lakes recently, but heavy rains did fall in locations farther upstream in northern and central Iraq this year. Additionally, it is possible that there were changes in water storage and release patterns upstream at dams along the Euphrates River. Dams and reservoirs along the Tigris and Euphrates can significantly alter the amount of water in locations further downstream. In 2019, Mosul Dam Lake in northern Iraq displayed a similar increase in water levels, which was due from a combination of heavy rain and changes in dam management.

The Iraqi National Investment Commission has been interested in restoring both Habbaniya and Milh. In January 2018, the group unveiled a $25 million investment project to develop the areas with hotels, a marina, and an amusement park.