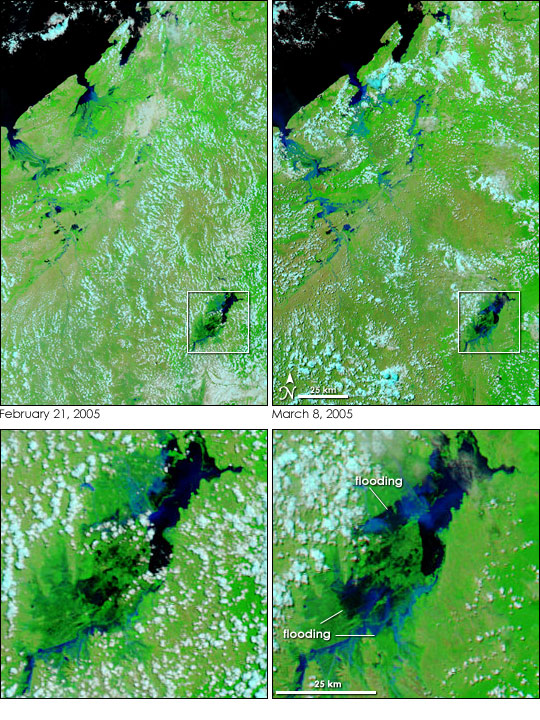 On the island of Madagascar, unusually heavy rains came down in the first week of March 2005, causing severe flooding across the central latitudes of the island. This pair of images from the Moderate Resolution Imaging Spectroradiometer (MODIS) on NASA’s Terra and Aqua satellites shows flooding over a wide area of the country (top) as well as a close-up of the flooding around Lake Alaotra (outlined in white) in the east-central part of the island. The image at left was captured on February 21 by Terra MODIS; the image at right was captured on March 8 by Aqua MODIS. Vegetation is bright green, water is shades of blue, and clouds are light blue.

Along the rivers flowing into the sea from the northwest (upper left) coast of the island, a dramatic widening of streams and small areas of standing water are noticeable in the later image (right). The lighter blue color likely indicates high amounts of sediment clouding the water. In the bottom two images, close-ups of Lake Alaotra show the extensive flooding of the lake, especially along the western and southern shores. According to news reports, several people were killed or injured, and thousands were left homeless as lake-side villages were flooded. Early estimates suggest that as much as 10 percent of the region's rice crop may have been lost or degraded. The high-resolution image linked to above is the March 8 scene showing the entire island at 250-meter-per-pixel spatial resolution. The MODIS Rapid Response Team provides images from March 8 and February 21 at additional resolutions.