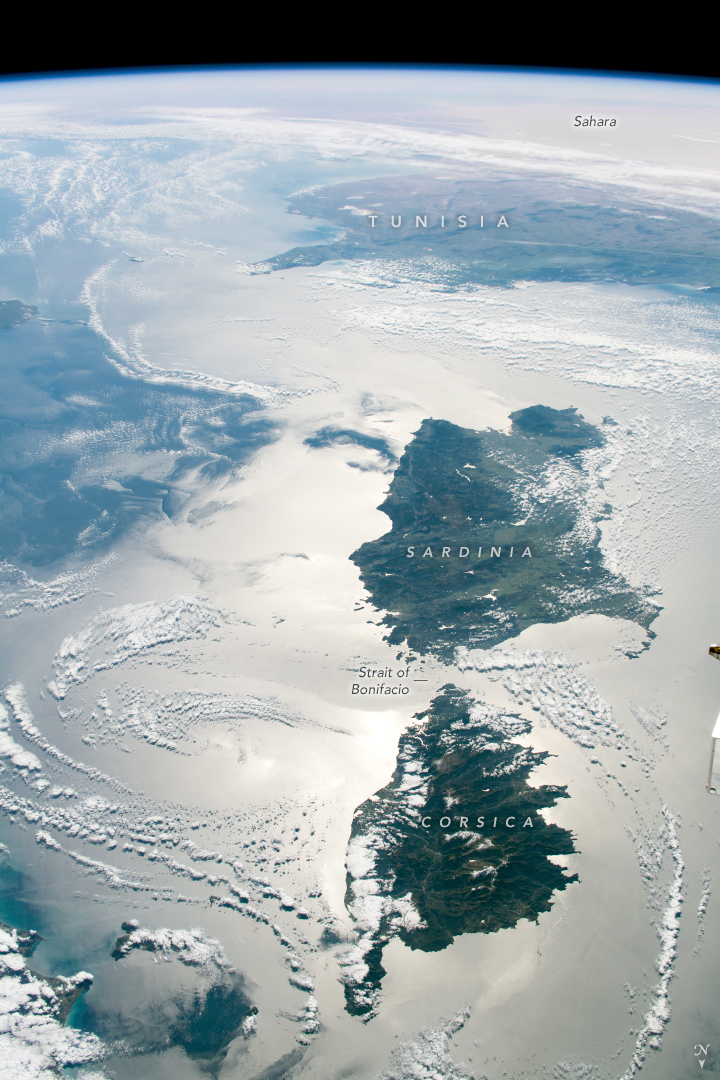 Sunglint reflects off the Mediterranean Sea, highlighting the islands of Corsica and Sardinia in this photo taken as an astronaut was looking south from the International Space Station (ISS). The islands have rugged, mountainous terrain with small lakes that also reflect sunlight.

Clouds are scattered throughout the photo, with some of those over the water aligning with changes in sunglint patterns. That is, the wind is likely blowing in the same direction at the sea surface and where the clouds are. The intensity of sunglint depends on the Sun’s angle with respect to the ISS orbit path and the astronaut’s point of view. But it also depends upon the smoothness or roughness of the water surface.

This photo shows the brightest sunglint along the eastern coasts of the islands (left sides in this view), where the sea is relatively calm. The high contrast between sunglinted water and land gives clarity to the jagged coastlines of Corsica and Sardinia. Sailors familiar with this area carefully navigate the rocky capes when seeking safe harbors.

Westerly winds funneling between the islands at the Strait of Bonifacio disturb the sea surface and subdue some of the reflective glint off the water. The rough water surface scatters sunlight in many directions, resulting in less light reflected back towards the astronaut’s handheld camera.

South of Sardinia, the coasts of Tunisia and Algeria also have the dark, vegetated hue indicative of the Mediterranean climate. Looking farther toward the horizon, the Sahara Desert stretches as far as the eye can see.

Astronaut photograph ISS062-E-44814 was acquired on February 21, 2020, with a Nikon D5 digital camera using a 58 millimeter lens and is provided by the ISS Crew Earth Observations Facility and the Earth Science and Remote Sensing Unit, Johnson Space Center. The image was taken by a member of the Expedition 62 crew. The image has been cropped and enhanced to improve contrast, and lens artifacts have been removed. The International Space Station Program supports the laboratory as part of the ISS National Lab to help astronauts take pictures of Earth that will be of the greatest value to scientists and the public, and to make those images freely available on the Internet. Additional images taken by astronauts and cosmonauts can be viewed at the NASA/JSC Gateway to Astronaut Photography of Earth. Caption by Andrea Meado, Jacobs Technology, JETS Contract at NASA-JSC.