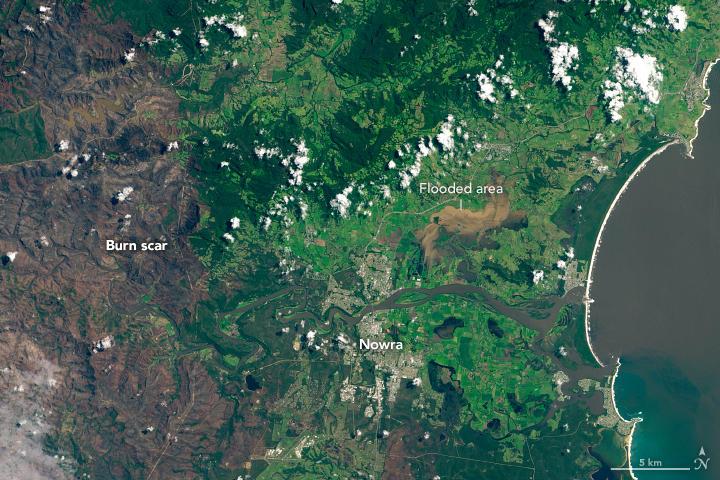 A season of extremes in eastern Australia—punctuated by raging wildfires, scorching summer temperatures, and long-term drought—took another dramatic turn in mid-February 2020. In just a few days, parts of Queensland and New South Wales (NSW) were soaked by more rain than many areas saw in all of 2019. The deluge swelled rivers out of their banks and swamped parched lands, leading to muddy floods in many coastal regions. More rain is expected later this week.

The Australian Bureau of Meteorology reported widespread rainfall totals above 200 millimeters (8 inches) in just 24 hours, with some reports as high as 500 to 700 millimeters (20 to 28 inches) across a week. Successive storm fronts raced inland from February 5-10 as “a coastal trough positioned parallel to the east Australian coast strengthened, maintaining widespread showers and rain.”

On January 25 and February 10, 2020, the Operational Land Imager (OLI) on Landsat 8 acquired images from the southeast coast of New South Wales. The images show flooded lands around the farming communities of Nowra and Bomaderry (about 160 kilometers/100 miles southwest of Sydney), one of the few areas visible through extensive cloud cover. Note the burned land on the left side of the image, a scar from the severe 2019-20 fire season. Click here for aerial photos and video of the scene within the Landsat imagery. 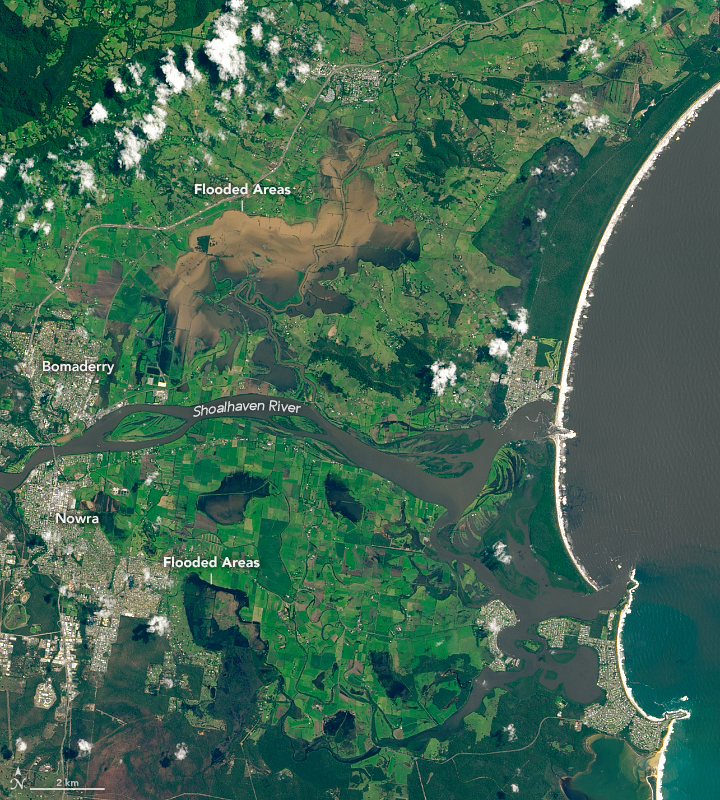 According to news media, Sydney experienced its heaviest rainfall in 30 years, coupled with gale-force winds. More than 100,000 people lost electric power, and emergency service crews worked to clear cars and fallen trees that were swept up in floodwaters. Citizens of several areas of New South Wales were evacuated due to floods.

The extreme rainfall had a few upsides. The NSW Rural Fire Service noted that several large wildfires were extinguished, reducing the number of active fires to 37. The heavy rain also gave hope to farmers and water managers, raising levels in rivers and reservoirs across the region and improving soil moisture. Much of Australia has been in drought for three to five years, and now some areas have started greening up again. It is not clear, however, if inland areas will see the same relief as coastal regions.

Meteorologists have encouraged citizens to stay on alert, as category 3 Cyclone Uesi blows by the Queensland and NSW coasts. The storm is not expected to make landfall, but its outer rain bands could bring more rain showers to already soaked areas on February 13-14.