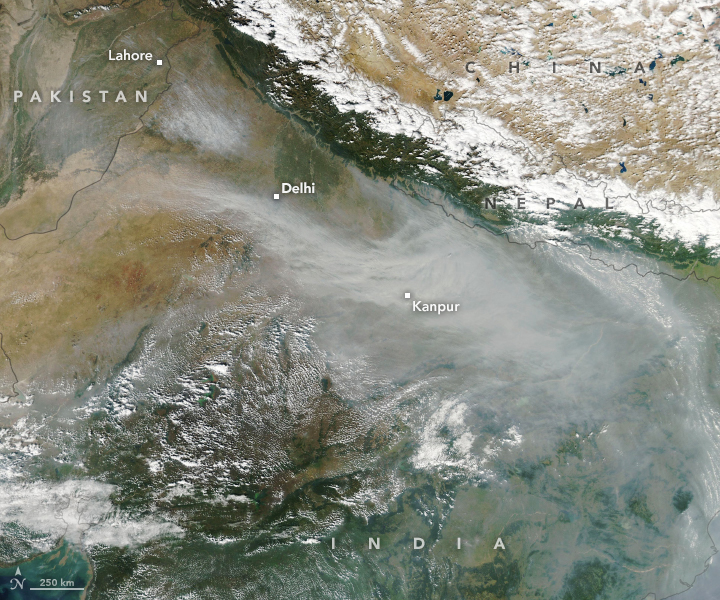 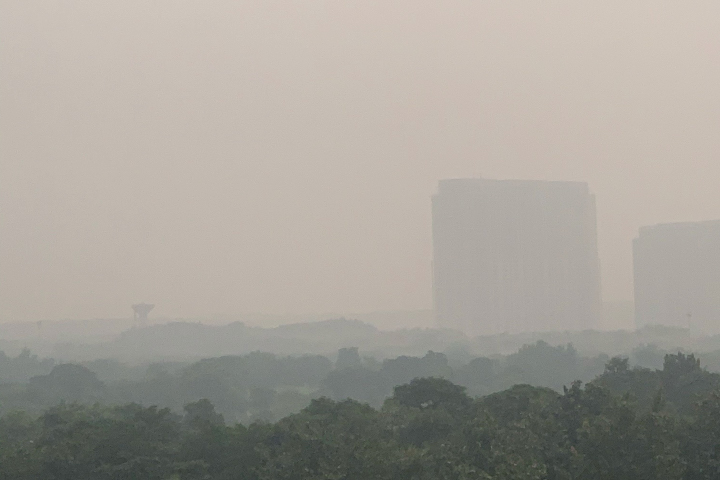 Hazy skies are a common occurrence over several states in northern India in November. After crops are harvested, winds often spread a river of smoke across much of the Indo-Gangetic Plain.

November 2019 was no exception. Smoke-filled skies led to hazardous air quality in many cities, hundreds of flight cancellations and delays, widespread school closures, and a two-week driving ban in Delhi.

While industrial pollution and dust can contribute to the haze, most of it comes from crop-burning—especially in the states of Punjab and Haryana, where rice and wheat are widely grown. Burning typically peaks during the first week of November, a time when many farmers set fire to leftover rice stalks and straw after harvest, a practice known as stubble or paddy burning. The burning often coincides with falling temperatures and slow wind speeds, meteorological conditions that can lead to temperature inversions, which trap smoke in place.

In 2019, NASA Earth-observing satellites began to detect significant numbers of fires in mid-October. By the end of the month, large numbers of fires were detected across much of the state of Punjab, as well as parts of northeastern Pakistan. The Moderate Resolution Imaging Spectroradiometer (MODIS) on NASA’s Aqua satellite captured this natural-color image on the afternoon of November 4, 2019, when a plume of smoke that had been emitted a few days earlier was sweeping through Delhi and Kanpur. The haze had pushed levels of fine particulate matter (PM2.5) to hazardous levels in Delhi, according to data collected at the U.S. Embassy.

“The first week of November is typically the peak of burning,” said Hiren Jethva, a Universities Space Research Association scientist based at NASA’s Goddard Space Flight Center. “We will likely see fire activity and smoke intensity begin to diminish next week.” He tracks the burning with several satellite sensors each year, noting that a particularly large rice crop in 2019 likely contributed to the severe burning.

The fires release several types of gases into the atmosphere, including smog-forming carbon monoxide and nitrogen dioxide. They also release aerosols, such as black carbon and organic carbon, that contribute to elevated levels of PM2.5, which can cause health problems.

From the ground, haze darkened skies and sharply reduced visibility. The photograph above shows hazy skies on October 31, 2019, in Gurugram, a city 30 kilometers (18 miles) southwest of Delhi. A nearby air quality sensor measured pollution levels on that day that exceeded 300 on the air quality index, high enough to be considered hazardous.

The photographer is a contributor to GLOBE Observer, a citizen science project that is part of the Global Learning and Observations to Benefit the Environment (GLOBE) Program. Through a free app for their mobile device, anyone in participating GLOBE countries can make environmental observations of clouds, trees, land cover, and mosquito habitats that complement NASA satellite observations.