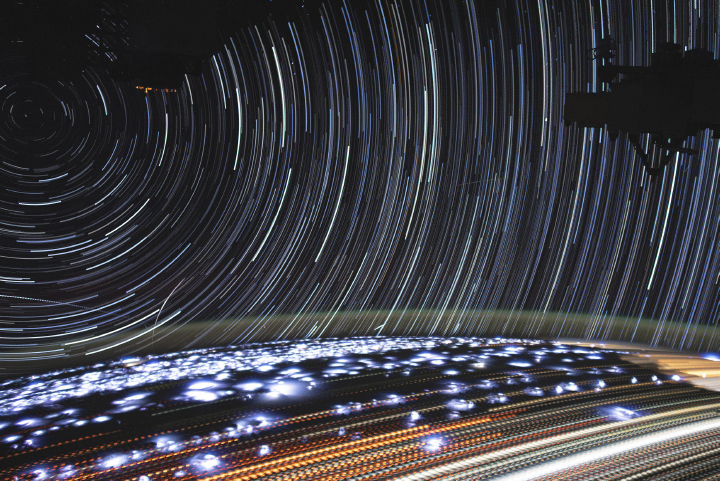 This image of star trails was compiled from time-lapse photography taken by NASA astronaut Christina Koch while onboard the International Space Station (ISS). This composite image was made from more than 200 individual photos taken over a span of about 6 minutes as the ISS traveled from Namibia toward the Red Sea.

The image includes many natural and artificial lights that an astronaut may see during an orbit at night. On the ground, stationary features like cities appear as pale yellow-white dotted streaks; with each dot marking another frame captured. Many of the thinner dotted lines with darker orange hues are fires burning across Angola and the Democratic Republic of the Congo.

Looking northward, thunderstorms cover much of central Africa. Bright white lightning flashes are captured in many of the compiled frames. Lightning stretches as far at the eye can see, clearly outlining Earth’s limb. Above the horizon there is a faint green-yellow tracing of the upper atmosphere known as airglow.

Perhaps the most striking features of this image are the star trails encircling the background around a point in the upper left corner of the image. “This point is essentially normal (perpendicular) to the ISS orbital plane, directly out of the port side of the vehicle based on the spacecraft silhouettes,” said Matthew Osvog of NASA Johnson Space Center’s ISS Flight Operations Pointing console.

This means the stars close to this perpendicular vector (near the upper left) appear stationary during the short duration of the time-lapse sequence, while stars with increasing angular distance (further away from the normal vector) trace out large circles as the ISS rotates in inertial space and while orbiting the Earth. As seen in this composite image, the star trails eventually get large enough to dip behind Earth’s limb. A few satellites are crossing in front of the star trails, traveling along different orbits.

Astronaut photographs ISS060-E-5407 to 5658 were acquired on July 5, 2019, with a Nikon D5 digital camera using a 28 millimeter lens and are provided by the ISS Crew Earth Observations Facility and the Earth Science and Remote Sensing Unit, Johnson Space Center. The images were taken by a member of the Expedition 60 crew. The images have been cropped and enhanced to improve contrast, and lens artifacts have been removed. The International Space Station Program supports the laboratory as part of the ISS National Lab to help astronauts take pictures of Earth that will be of the greatest value to scientists and the public, and to make those images freely available on the Internet. Additional images taken by astronauts and cosmonauts can be viewed at the NASA/JSC Gateway to Astronaut Photography of Earth. Caption by Andrea Meado, Jacobs Technology, JETS Contract at NASA-JSC.