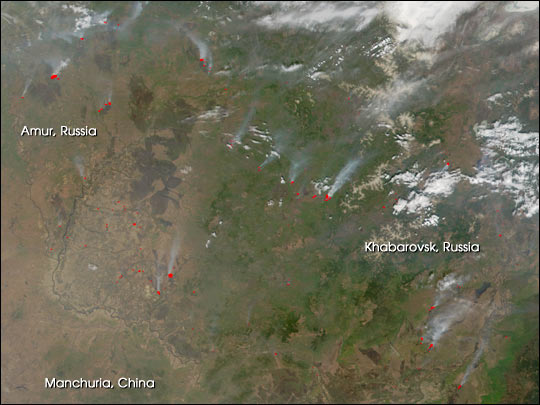 This scene shows a large number of fires burning across southeastern Russia, releasing a considerable amount of smoke and haze into the atmosphere over the entire region. This true-color image was acquired on May 13, 2001, by the Moderate-resolution Imaging Spectroradiometer (MODIS), flying aboard NASA's Terra spacecraft. The many red pixels correspond to the locations of fires burning on the ground.

The scene spans large portions of the southeastern Russian provinces of Khabarovsk and Amur, and the northernmost region of the Chinese province of Manchuria, located on the Asian mainland southwest of the Sea of Okhotsk. Notice the many dark, irregularly-shaped splotches at various places on the land. These are burn scars from both active and previous years' wildfires. The burn scars are particularly prominent in the western half of this image. If you look carefully, you will see there is some vegetation regrowth in the northern portion of the largest of the burn scars; the Zeya River bisects this portion of the burn scar.

Tracing the Zeya River toward the southwest, the river converges with the Amur River at the border between Russia and Manchuria, China. The Russian city of Blagoveshchensk is located at the fork of where these rivers meet.