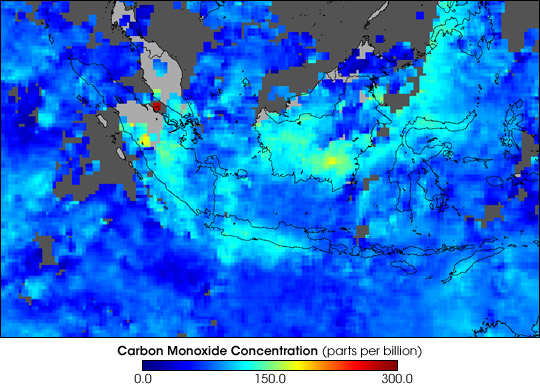 Thick haze is an annual problem on the Indonesian islands of Borneo and Sumatra during the dry season, which runs from about May through September. Along with the dry season comes large fires, often set to clear land for agriculture. This year, the choking haze and smoke produced by such fires grew particularly bad during the third week of August. On August 21, 2004, air traffic was temporarily suspended because of the low visibility.

In addition to decreasing visibility, the fires burning in Indonesia produce high levels of carbon monoxide (CO), which are detected from satellite by the Measurements of Pollution in the Troposphere (MOPITT) instrument. The image above shows the CO mixing ratio at 850 hectopascals (roughly 1-2 kilometers altitude) derived from MOPITT observations for August 5-20, 2004. The mixing ratio is given in parts per billion by volume (ppbv). Red and yellow colors represent high CO levels, blue colors mark low levels of pollution. Gray areas indicate where no data have been collected due to persistent cloud cover.

The image above correlates well with images taken by the MODIS instrument on board the Aqua satellite showing the location of the fires and the outflow of smoke, see Fires on Borneo. Here, black outlines show the shape of the islands under the data. The largest island on the top right is Borneo. Yellow pixels, indicating high carbon monoxide concentrations, color the southeast corner of the island where the MODIS images also show fires and haze. Carbon monoxide concentrations also appear to be high on Sumatra, the long island pointing into the upper left corner of the image.

Data courtesy of the NCAR and University of Toronto MOPITT Teams.

Annual fires burning on Borneo and Sumatra in Indonesia have left the islands under a choking blanket of haze. As a result, the Terra MOPITT sensor observed elevated levels of carbon monoxide over the region.