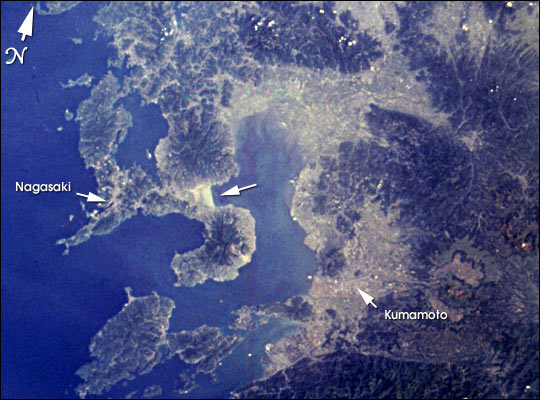 The Isahaya Bay Reclamation project separated approximately 3,000 hectares of tidal flats from the Ariake Sea in 1997. This photograph was taken from the Space Shuttle on April 27, 1998, a year after the sea wall separating Isahaya Bay from the rest of the Ariake Sea was closed. The reflective white area (center arrow) shows the straight edge of the sea wall and the drying tidal flats.

The project has been highly controversial because of concerns by environmental groups about the loss of wetland habitat. Hirofumi Yamashita was awarded the 1998 Goldman Environmental Prize for his scientific efforts documenting the ecological value of the bay and his grassroots activism trying to stop the closing of the sea wall. In 1992, he catalyzed other organizations to form the Japan Wetlands Action Network, composed of 70 grassroots and national conservation organizations, and became its spokesperson. Yamashita died in July 2000.

According to a January 2001 Reuters News Article, fishermen have been demonstrating at the sluice gates in support of a government panel’s recommendation that the gates be opened. Seaweed growers believe the reduced availability of nori (seaweed) produced in the Ariake Sea is tied to environmental damage caused by the building of the seawall.

Photograph STS090-739-79 was provided by the, Johnson Space Center Earth Sciences and Image Analysis Laboratory. Additional photographs taken by astronauts can be viewed via the NASA — JSC Gateway to Astronaut Photography of Earth.

The Isahaya Bay Reclamation project separated approximately 3,000 hectares of tidal flats from the Ariake Sea in 1997. This photograph was taken from the Space Shuttle on April 27, 1998, a year after the sea wall separating Isahaya Bay from the rest of the Ariake Sea was closed.