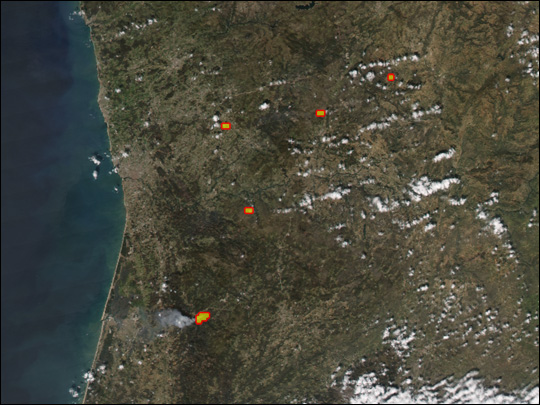 On March 27, 2004, a wind-driven forest fire was burning out of control in central Portugal, forcing evacuations of children and the elderly as a precaution. Several hundred firefighters were battling the blaze, which reportedly broke out in a eucalyptus grove. This Moderate Resolution Imaging Spectroradiometer (MODIS) image from March 27, shows the fire marked in yellow with a red outline toward the bottom left of the image. The fire is burning east of the Ria de Aveiro Lagoon on the Portuguese coast. Additional fires were detected in the scene as well, but these may be agricultural, and not wildfires.

Image by Jesse Allen, based on data from the MODIS Rapid Response Team, NASA-GSFC