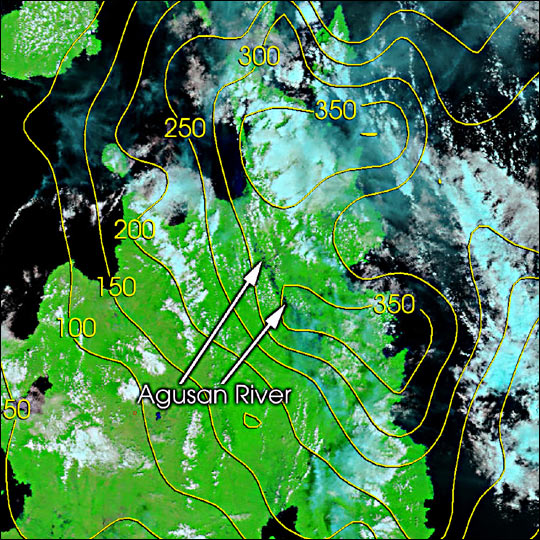 Several days of heavy rains led to widespread flooding on the island of Mindanao in the southern Philippines. The heaviest rains occurred on February 11-12, 2004 as a steady northeast flow associated with the winter monsoon persisted across the region. These northeasterly winds interacted with the Diuata Mountains that stretch north-south along the eastern part of the island to enhance precipitation associated with a tropical disturbance. Three people were reported killed in the province of Agusan del Sur and thousands were left homeless due to the ensuing floods. Numerous landslides were reported, and the Agusan river which runs north- south just west of the Diuata Mountains overflowed its banks.

The TRMM-based, near-real time Multi-satellite Precipitation Analysis (MPA) at the NASA Goddard Space Flight Center monitors rainfall over the global tropics. This image shows contours of the MPA rainfall totals every 50 millimeters overlaid on top of a Moderate Resolution Imaging Spectroradiometer (MODIS) image, taken on February 17, 2004, at 2:05 UTC by the Terra satellite. It shows the Agusan river (marked by the arrows) swollen by the heavy rains that fell days earlier over the river basin and the higher terrain to the east.

A second TRMM image, provided above, shows MPA rainfall totals for February 10-17, 2004. The highest totals are shown to be right over the Diuata Mountains over the northeast part of the island where as much as 16 inches of rain (darkest reds) are estimated to have fallen. Areas that received on the order of 10 inches of rainfall (red areas) cover most of northeastern Mindanao and extend well out into the Philippine Sea. Amounts drop off sharply towards the western half of the island but are still on the order of 5 inches over the central part of Mindanao.

Several days of heavy rains led to widespread flooding on the island of Mindanao in the southern Philippines.