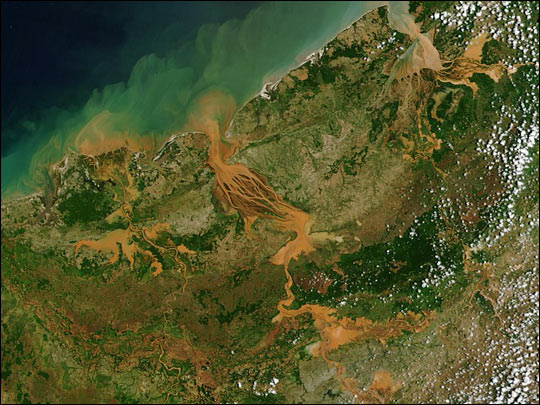 Mud-rich water gushes off the northwestern shore of Madagascar in the wake of Tropical Cyclone Elita in this Moderate Resolution Imaging Spectroradiometer (MODIS) image acquired by the Terra satellite on February 8, 2004. The storm first came ashore near this area on January 29. Elita drifted down the west coast, and then pulled back into the Mozambique Channel, where it hovered offshore for many days, dropping as much as 20 inches of rain in northwestern Madagascar. On February 3, Elita cut across the island for a second time, spinning out into the Indian Ocean on February 4. By the time the storm passed, 18,000 people were left homeless and 6 died, according to the United Nations Office for the Coordination of Humanitarian Affairs.

The intense rains destroyed buildings and pushed rivers to overflowing. When this image was taken, four days after the storm had passed, the rivers were still swollen with reddish mud. A halo of green rings the coast where sediment has washed off the shores and is diffusing in the ocean water.