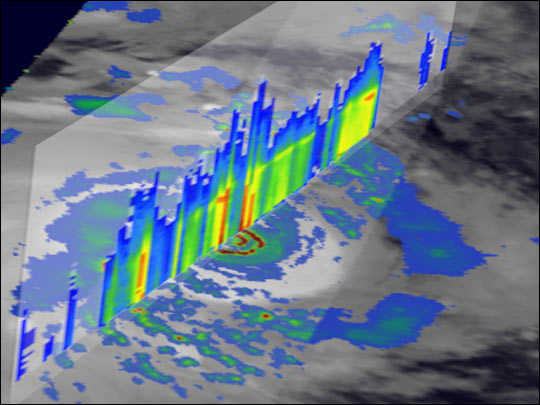 Heta meandered northwest of Samoa over the weekend before turning south and passing just west of the islands on Monday, January 5, 2004. Winds up to 105 miles per hour buffeted the islands knocking out power, uprooting trees, and causing extensive roof damage. After passing Samoa, Heta continued southeast and intensified with sustained winds estimated at 133 miles per hour and gusts of up to 185 miles per hour as it was headed for the tiny island nation of Niue.

The Tropical Rainfall Measuring Mission (TRMM) satellite captured these impressive images of Cyclone Heta as it was passing just west of Samoa. The images were taken at 6:08 UTC on January 5, 2004.

This image shows a vertical cross section through the eye of the storm from the TRMM PR. It shows areas of heavy rainfall (red areas) extending upwards to midlevels in the eyewalls and in an outer rainband as well as deep convective towers surrounding the eye extending to upper levels (blue areas above red areas). Another image shows the horizontal distribution of rain rates as seen from above by the TRMM satellite.

TRMM reveals that Heta has a double eyewall structure, which can sometimes occur in mature, intense tropical cyclones. The outer eyewall, the intense band of heavy, 2-inch-per-hour rain rates shown by the dark red circle completely surrounds a partial inner eyewall shown by the smaller dark red semicircle. Tropical cyclones act as large heat engines. When water vapor condenses into the cloud droplets that form the precipitation, heat, known as latent heat, is released and drives the storm. Generally, the more heat that is released, the more powerful the storm will become. This heating is also most effective near the center of the storm as is the case with Heta.

These images show Cyclone Heta as it moves through the South Pacific over Samoa and Niue.