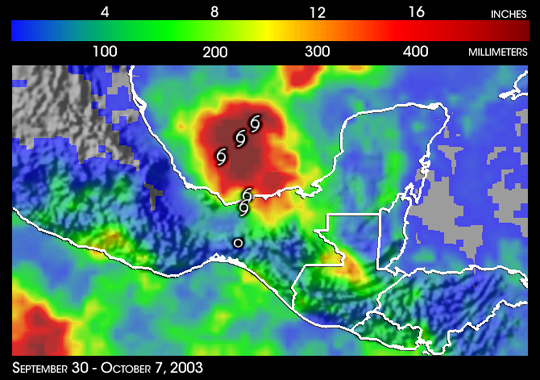 Tropical Storm Larry formed in the Bay of Campeche in the southern Gulf of Mexico on the evening of October 1, 2003. Larry remained a tropical storm with winds reaching up to 60 mph as estimated by the National Hurricane Center. Larry was nearly stationary at times, and slowly drifted southward before coming ashore near Coatzacoalcos, Mexico on the Gulf Coast side of southern Mexico on the morning of the 5th.

The primary threat from Larry was flooding due to the storm's slow forward speed. The TRMM-based, near-real time Multi-satellite Precipitation Analysis (MPA) at the NASA Goddard Space Flight Center shows rainfall totals associated with Larry for the period September 30 to October 7, 2003. Fortunately, the heaviest amounts, on the order of 20 inches (darkest reds), appear offshore. However, coastal areas received up to a foot of rain (red areas) with 4 to 10 inches (green to yellow areas) occurring inland between the coast and the highlands of the southern Sierra Madre.

Tropical storm symbols mark the positions of Larry every 24 hours beginning at 7 pm CDT on October 1 as reported by the National Hurricane Center. Larry first drifted towards the southwest then jogged to the southeast before continuing to move southward.

Tropical Storm Larry, now downgraded to a Tropical Depression, has been drenching the Mexican coastline 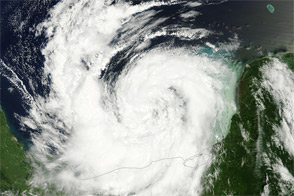 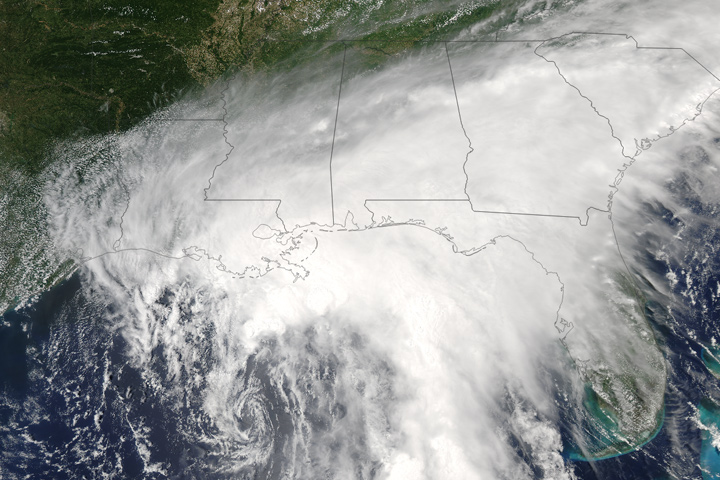