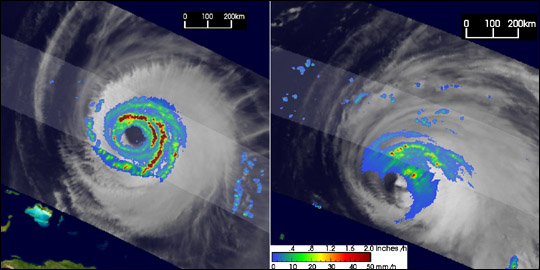 After churning through the central and western Atlantic as a powerful hurricane with sustained winds up to 160 miles per hour, Isabel has weakened dramatically as a result of encountering dry air and westerly wind shear west of the Bahamas. Throughout the storm’s journey across the Atlantic, the Tropical Rainfall Measuring Mission (TRMM) satellite has continued to monitor Isabel’s progress and provide valuable information on the storm’s structure.

The first image was taken on September 15, 2003, at 3:44 UTC (September 14, 11:44 pm AST) when Isabel was still classified as a very powerful Category 4 storm with winds estimated at 155 mph. It gives a top-down perspective of Isabel in terms of rainfall rates from the TRMM Precipitation Radar (PR) in the inner swath spliced together with those from the TRMM Microwave Imager (TMI) in the outer swath. These are overlayed on Infrared (IR) data from the TRMM Visible Infrared Scanner (VIRS). It shows that Isabel has a large, well-defined eye with long bands of intense rainrates of over 2 inches per hour (dark red areas) that are feeding heat energy into the storm mainly north and east of the center. The IR data also shows that Isabel has good cirrus outflow indicating a favorable environment for the storm. At this time Isabel was located about 535 miles due east of Nassau in the Bahamas and was moving west-northwest at 13 mph.

The next image, taken almost 24 hours later at 2:56 UTC on September 16 (September 15, 10:56 pm AST), shows a very different looking Isabel. The eye has become ragged and disorganized, and the eyewall convection is essentially gone as evidenced by the lack of any appreciable areas of intense rainfall. Without those heavy rainrates associated with the eyewall convection releasing their heat energy into the core of the hurricane, Isabel is like a giant engine whose cyclinders are not firing and will thus slowly spin down unless new convection occurs. At this time, Isabel’s winds were down to 120 mph as estimated by the National Hurricane Center. The storm was located 700 miles south-southeast of Cape Hatteras, North Carolina and was heading northwest at 7 mph.