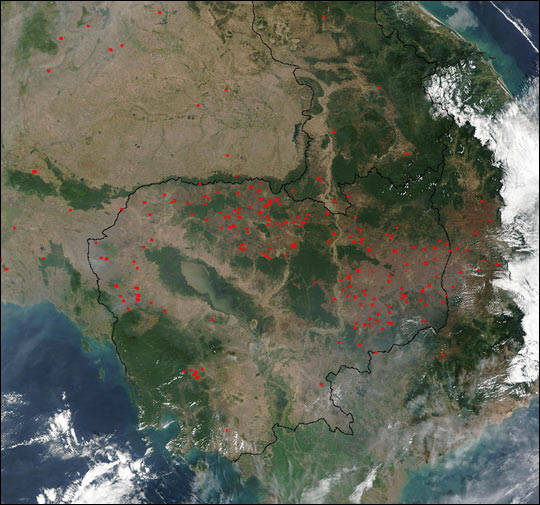 Biomass burning in Southeast Asia peaks in late winter or early spring as farmers begin to prepare land for seasonal planting. The widespread nature of the burning creates a seasonal pattern of emissions that play a significant role in regional air pollution, including tropospheric ozone. (Ozone can be both beneficial and harmful in the atmosphere, depending on its altitude. High up in the stratosphere, ozone protects the planet from harmful UV radiation. Closer to earth, tropospheric ozone is a harmful air pollutant.)

Like most parts of the world, the burning in Southeast Asia exhibits a diurnal (daily) cycle, in which burning is less widespread in the morning and increases throughout the day. Compare this morning image of Southeast Asia, including (left to right) Thailand, Cambodia, Laos, and Vietnam, captured by the Moderate Resolution Imaging Spectroradiometer (MODIS) on the Terra satellite to the same area captured by Aqua MODIS in the afternoon. Note the dramatic increase in fires (red dots) in the afternoon image. This image was acquired Jan. 31, 2003.

The intense biomass burning in Southeast Asia, ongoing for the last several months, has released high levels of carbon monoxide into the atmosphere over the region, as measured by the Terra MOPITT sensor from April 3-13, 2003.