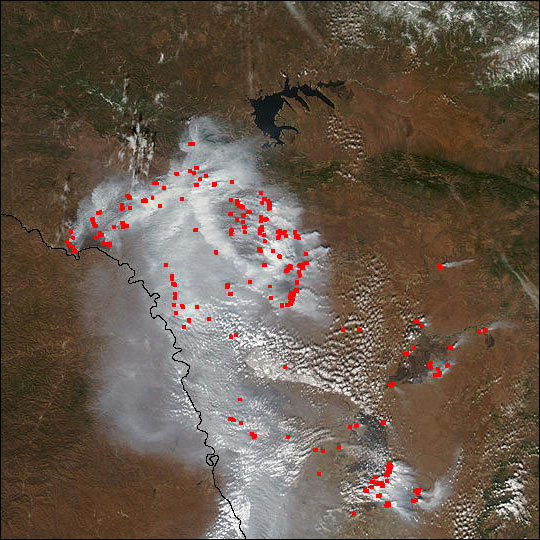 Even as the vegetation of the Amur River region fades to golden brown and taiga forests to the north show signs of winter's arrival, numerous fires (red dots) have been detected in the agricultural lands at the border of Russia (north) and China (south). Heavy smoke drifts far to the south in this true-color Moderate Resolution Imaging Spectroradiometer (MODIS) image from October 8, 2002. Perhaps the farmers are preparing the fields for a late season crop.

Fires have persisted in this region throughout the fall. Previous images in this series are centered eastward of this one.

In September and October 2002, numerous fires in eastern Russia created a smoke plume that stretched eastward over the Sea of Okhotsk and southward into China. These true-color images were captured by the Moderate Resolution Imaging Spectroradiometer (MODIS) instruments on the Terra and Aqua satellites.