Putting METRIC to Use

Allen’s model is called METRIC, for “Mapping Evapotranspiration at high Resolution with Internalized Calibration,” and by 2003 METRIC was beginning to run as an operational model at the Idaho Department of Water Resources. Within a short span of time, METRIC was being used to solve a wide variety of problems. Regional planners asked for METRIC data to decide if turning a farm into a residential subdivision near Boise would require more or less water. METRIC showed that the subdivision would consume less water. METRIC was used to find a balance between farmers and fish by showing how much water the farmers were consuming and how much could have remained in the stream for endangered fish. The information helped the state plan realistic limits on the amount of water that can be drawn from a stream.

When the A&B water call came in 2007, recalls Kramber, “our bureau chief came to us and asked if there was any type of imagery-based data that would help supply information.” The department had Landsat-based evapotranspiration data for three days during the summer of 2006. “We thought if that area is short of water, we should be able to see that on those images,” he said. 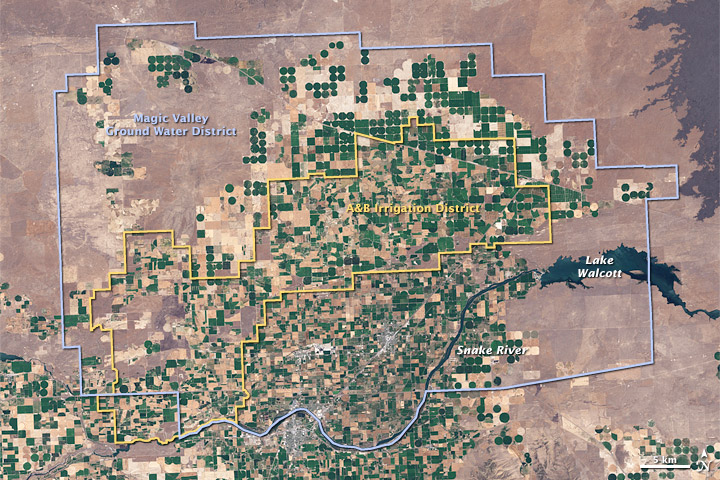 The A&B Irrigation District and the overlapping Magic Valley Ground Water District both draw water from the Snake River Plain Aquifer. To settle the districts’ 2007 dispute over water use, the Idaho Department of Water Resources used Landsat evapotranspiration data to determine that crops in A&B had been getting about the same amount of water as surrounding crops. This natural-color satellite image shows the region on August 1, 2001. (NASA Earth Observatory image by Robert Simmon, based on Landsat 7 and Idaho Department of Water Resources data.)

To determine if farmers in the A&B district had been damaged by water shortages, all Kramber and his colleagues had to do was compare water use, which they got from evapotranspiration measurements in METRIC, to vegetation growth, which Landsat measures directly. They compared these measurements for the A&B district to surrounding farms that relied on both ground water and surface water.

“It just didn’t look like the area was any different than the surrounding areas. If it had been short of water, it should have shown a lower evapotranspiration rate,” says Kramber.

The director of the Idaho Department of Water Resources decided that there simply wasn’t enough evidence that A&B farmers had suffered substantially as a result of water shortages. Their fields seemed to be as productive as anyone else’s. The director denied the water call, deciding not to curtail Stevenson and other ground water irrigators in his district. A&B appealed the decision, bringing METRIC into the Idaho court system. The appeals are still in progress.

With his water rights upheld for now, Stevenson sees applications for METRIC outside the courtroom. He sees it as a tool that could help him save money by helping him assess how much water he is actually using. It costs money to pump water from the aquifer, and he only wants to pump what he actually needs. “Water is a finite resource, and whatever we can do to try to maximize and optimize the use of that resource is a good thing for us. Whatever we can do to get better information on what [water] we use, we as producers will benefit from that,” he says.