Because of differences in geography and climate, the amount, location, and natural variability of sea ice in the Arctic and the Antarctic are different. Global warming and natural climate patterns may affect each hemisphere’s sea ice in different ways or at different rates. Within each hemisphere, sea ice can change substantially from day to day, month to month, and even over the course of a few years.

Comparing conditions at only two points in time or examining trends over a short period is not sufficient to understand the impact of long-term climate change on sea ice. Scientists can only understand how sea ice is changing by comparing current conditions to long-term averages. 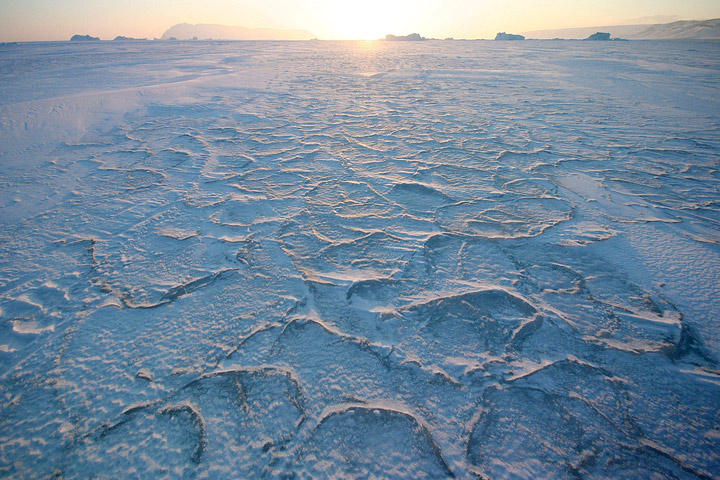 The Sun hangs low on the horizon above solidified pancake ice in the Arctic Ocean. (Photograph courtesy Andy Mahoney, NSIDC.)

Since 1979, satellites have provided a consistent continuous record of sea ice. Through 2015, the average monthly September extent of Arctic sea ice has declined by 13.4 percent per decade relative to the average from 1981 to 2010. Declines are occurring in every geographic area, in every month, and every season. Natural variability and rising temperatures linked to global warming appear to have played a role in this decline. The Arctic may be ice-free in summer before the end of this century.