Perhaps the greatest contribution of Landsat is the ability to observe the Earth’s land surfaces through time. To take a snapshot of something shows you only what is true for that split second; to show what is happening over generations is different. Time is part of the scaffolding of science.

Landsat can take snapshots showing the state of crops in California or North Dakota, volcanic hot spots in Yellowstone, or mineral deposits in Death Valley. And it can see all of them in ways never possible before. The satellites can take snapshots over the course of a few days, graphically capturing the damage from Hurricane Katrina, the Tohoku tsunami, a tornado in the hills of Massachusetts, or a forest fire in Arizona. Government officials can watch disaster recovery as it happens.

Landsat has done all that and something more. It has assembled a complete picture of all the landmasses on Earth. If you have Google Earth on your computer or smart phone, you are seeing Landsat images as you zoom in. 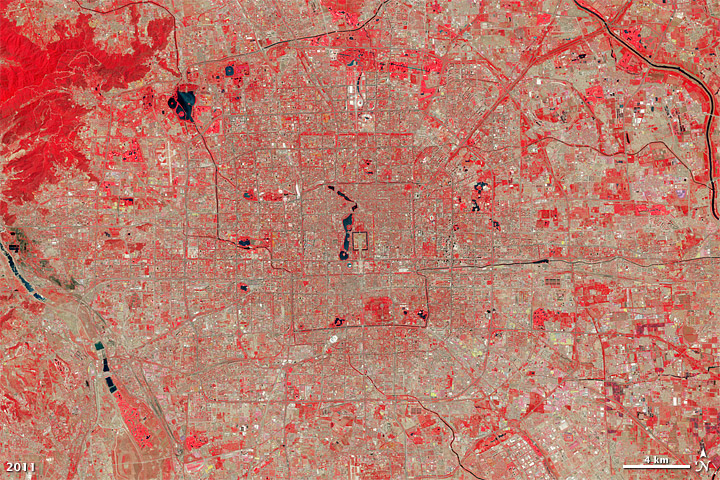 The longevity of Landsat allows scientists to monitor natural and human-induced changes on the Earth’s surface. This pair of images shows the growth of Beijing from June 21, 1978, to June 8, 2011. In these false-color images, vegetation is red and bare ground or human development (roads, buildings) are tan to brown. (NASA images by Robert Simmon, using Landsat 3 & 5 data from the USGS Global Visualization Viewer.)

But the true gift of watching the Earth is the long view. Landsat can monitor a changing planet over time: the appearance and disappearance of barrier islands; melting glaciers in Greenland and the Antarctic; rising sea levels; the evolution of forests in the Rockies; and the erosion of coastlines in Alaska. Landsat has measured the use and misuse of water resources in the American West, and helped planners keep an eye on urban growth.

And so it was that Landsat found the mining and pollution in Peru that no one had noticed before. With the price of gold skyrocketing (360 percent in 10 years from 2001 to 2011), unlicensed miners began pouring into Peru’s Madre de Dios. They cleared 12,500 acres from the forest between 2003–2009. Landsat images showed local deforestation increasing at a rate of 26 percent per year.

While the deforestation itself was not great enough to pose much of a threat to the forest, the mercury was. Miners use mercury to extract gold from rocks. It vaporizes during the process and becomes airborne, eventually poisoning water supplies.

Mercury was getting into the fish, and the people were eating the fish. They were also drinking the water. Tests of local residents showed that the closer they were to the mines, the more mercury in their bodies.

The stewards of the rainforest now have work to do. Landsat looked; the scientists saw. Lives will be saved.