The original plan for Landsat was to rely solely on special television-style cameras called return beam vidicons (RBVs) to do the imaging. RBVs have three cameras, each using a colored filter—one for the blue-green part of the spectrum, one for yellow-red, and one for the red-infrared part—and each revealing a different aspect of the physical world.

But while ERTS/Landsat 1 was being designed, Hughes Aircraft came up with a new instrument that used the emerging technology of fiber optics and imaged the Earth in strips. As the satellite orbited, the scanner would take six strips of pictures at 90-degree angles, perpendicular to the direction it was traveling. It also took pictures in four different parts of the spectrum. For instance, one band could show how plants were absorbing chlorophyll; another could observe the water content of leaves; a third could see moisture in the soil—all valuable things to record if you are tracking vegetation or biomass. Hughes called it the Multispectral Scanner System (MSS), and NASA decided to add it as a second imager. 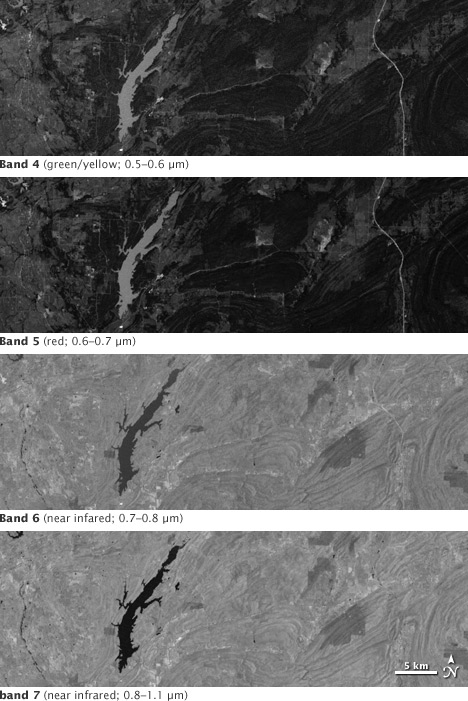 The Multispectral Scanner System aboard the early Landsat satellites imaged the earth in four spectral bands, ranging from 0.5 micrometers (green), to 1.1 micrometers (near infrared). Each band brings out different features in the landscape, and ultimately can be combined to make color images. (NASA images by Robert Simmon, using Landsat data from the USGS Global Visualization Viewer.)

Many scientists had concerns about the reliability of the new approach. The MSS had a moving part—an oscillating mirror—that some feared might break or jam. Researchers also were unhappy with the idea of having strips of images that would have to be merged.

Then the satellite was launched and the first MSS images came down. They had jaw-dropping beauty and exquisite detail. To make the victory complete, the RVB malfunctioned and was shut down a month after launch, while the MSS kept sending images for years. 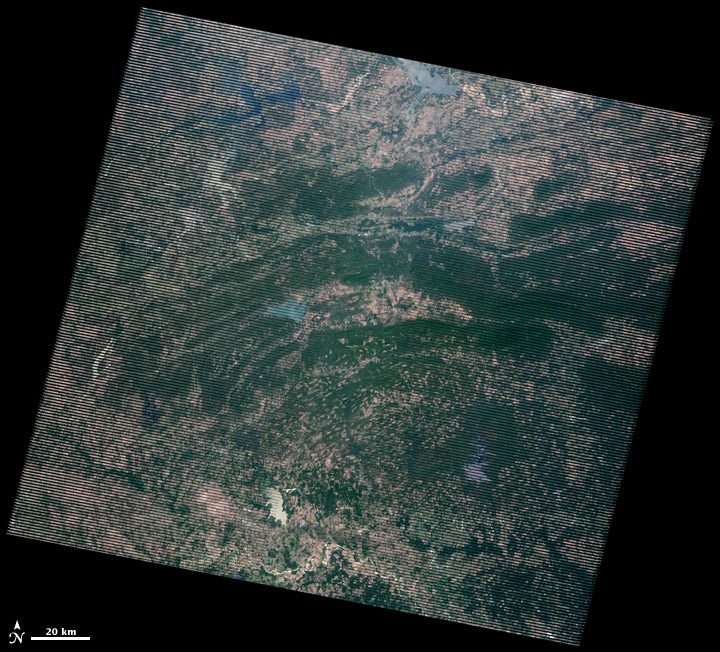 Landsat images the Earth’s surface in a series of scenes 185 kilometers (115 miles) wide. Landsat 7 is currently collecting data, but suffered a failure in 2003 that leaves gaps between scan lines. This Landsat 7 image, collected on June 26, 2012, shows the Ouachita Mountains, along the border between Oklahoma and Arkansas. (NASA image by Robert Simmon, using Landsat 7 data from the USGS Global Visualization Viewer.)

For Landsat 4 and 5, Hughes replaced the MSS with the Thematic Mapper (TM), a next-generation, somewhat higher resolution imager. With a 30-meter (100-foot) ground resolution along a 185-kilometer (115-mile) swath of land, Landsat could now provide worldwide coverage between 81°N latitude and 81°S every 16 days, at a resolution that made it easier to see large-scale patterns and changes on nearly every land surface.

By the time Landsat 7 launched in 1999, the satellite had an eight-band, enhanced version of the mapper (ETM+), powerful enough to build a worldwide database with as much as 400 detailed images per day. Unfortunately, the scanner malfunctioned in 2003 and 22 percent of each scene was lost. But image blending techniques have allowed the operators to worked around the image losses. Landsat 7 is still sending back its data 13 years after its launch.