Bridging Polar Ice to the Future

Putting IceBridge measurements into small-scale models of single glaciers or sea ice prediction models is a first step toward improving global models that can predict sea level rise and climate change. To speed up the process, the IceBridge team did something unprecedented.

“We asked the community where to fly the airplane to make the models better,” says Studinger. The community responded with excitement and a bit of trepidation, says Nowicki. “It’s the first time that modelers were asked ‘what do you need?’” 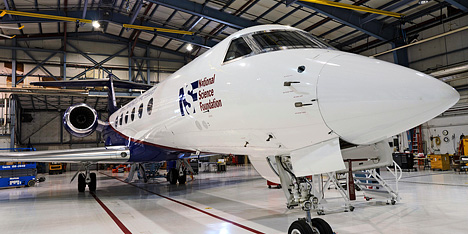 The collaboration has led to a new computer-based tool that tells mission planners where measurements are lacking and how much models will improve if they fly the plane over these locations. This allows planners to chart flight paths that will do the most to improve models. “It’s the first time that an observation campaign has this kind of strong link with the modeling community,” says Nowicki, who represents modelers on the IceBridge science team.

The link to the modeling community will have ramifications long into the future. “In 2030, we’re going to have much more advanced computer models of the global climate and the ice,” says Wagner. “We’re going to need decades of data to test those models against. I’m hopeful that we’re collecting the right data sets so that 20 years from now, we’ve got a long enough record that we can use them to make accurate predictions about the future.”

In October 2011, the IceBridge team set out for their third series of flights over Antarctica. One long, tedious flight at a time, some as long as 20 hours, the team painstakingly peels back layers of new information about the ice. Studinger, Kwok, Rignot, and other IceBridge team members each express awe for the remote, fragile beauty of the place, but beneath that awe is a sense of obligation and urgency.

The early morning sun shining on coastal Greenland is one of the many beautiful landscapes seen by IceBridge scientists and crew. (Photograph courtesy Michael Studinger, NASA.)

“We feel pressure to come up with results, to find out what the ice sheets will do in a warming climate,” says Rignot. The IceBridge mission is flying at a time when ice is changing faster than anyone thought it could, and change provides opportunity. “We can learn a lot quickly because the system is changing so rapidly. We are in the golden age of glaciology, but we are also facing an immense challenge.”