The Weight of Water

“GRACE gives you variations in the total water stored on and in the land,” confirms Rodell. “But in order to figure out whether those changes are happening in the ground water, soil moisture, snow, or surface water, we need auxiliary information. We use physics equations and computer models to figure out what happens to the water after it hits the land as rain or snow.”

In some parts of the world, particularly the tropics, most of the water is stored on the surface in lakes, rivers, and wetlands. In cold regions, water mostly accumulates as snow and ice. In the temperate middle latitudes (including most of the United States), soils and aquifers are the major stores of water.

In the top layer of the soil, the spaces between the soil grains are filled with air and water, explains Famiglietti. Gravity pulls the water down into the Earth, so as you go progressively deeper in the soil, the pore spaces become more and more full. When water fills every pore, the soil is saturated. 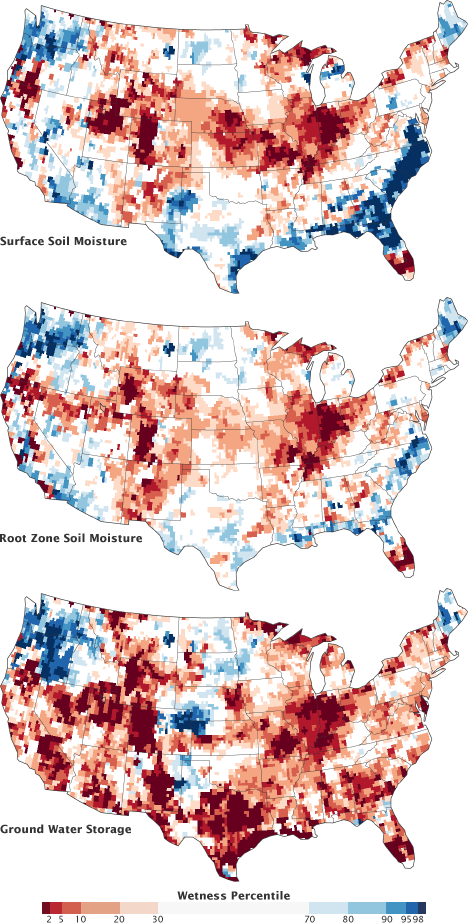 Scientists combine GRACE data with ground-based measurements to map water at the surface, in the root zone, and stored in ground water. These maps compare conditions during the week of August 20, 2012, to the long-term average from 1948 to the present. For example, dark red regions represent dry conditions that should occur only 2 percent of the time (once every 50 years). (Maps by Chris Poulsen, National Drought Mitigation Center at the University of Nebraska-Lincoln, based on data from Matt Rodell, NASA Goddard Space Flight Center, and the GRACE science team.)

One way Rodell distinguishes between snow, surface water, soil moisture, and groundwater is a process of elimination. He also assembles data on how much rain or snow has fallen at each location, the soil type, amount of sunlight, wind speed, and other meteorological variables, and combines them within a land surface model. This computer model uses hundreds of equations to determine the fate of energy from the Sun and of water after that energy hits the land surface. The results include maps of groundwater, soil moisture, and evaporation, and how they all vary over time.