The measurement of gravity by satellite is as old as the Space Age, notes Srinivas Bettadpur, GRACE’s science operations manager at UT-Austin. Early engineers, including GRACE principal investigator Byron Tapley (UT-Austin), detected variations in satellite orbits that could only have been caused by variations in gravity.

“The first thing I tackled in the 1970s was the task of computing the orbits of satellites very accurately to support satellite altimeter missions,” says Tapley. “We reached the point that we could compute orbits that had an accuracy of a few centimeters.” Eventually his computations hit a glitch that he couldn’t fix. The satellite orbits varied seasonally.

Tapley and others realized that these subtle shifts in Earth’s gravity occurred primarily because water moves from one place to another on and under land, in the ocean, and in the atmosphere. In the early days, Tapley’s orbital variations could capture movement on the scale of a hemisphere. But no one could measure the subtle, tiny shifts accurately enough to map Earth’s gravity in fine detail. 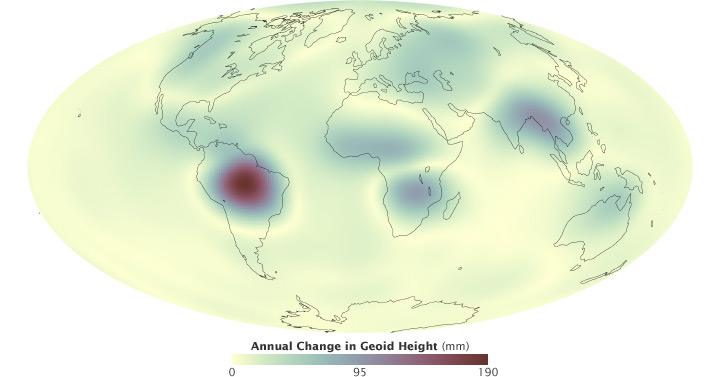 GRACE measures the Earth’s gravity precisely enough to map the seasonal movement of water. This image shows the yearly change in the Earth’s geoid. The biggest variations occur in the Amazon, followed by other areas with large changes in rainfall between wet and dry seasons. (NASA map by Robert Simmon, using data from the University of Colorado Real-Time GRACE Data Analysis Site.)

“When we first proposed GRACE, there was a lot of concern about how well we could determine where the gravity signal is coming from,” says Michael Watkins, the GRACE project scientist at NASA’s Jet Propulsion Laboratory (JPL). “Could you easily see the difference between a reservoir in North America versus ice melt in Greenland versus ocean circulation? We did a lot of simulations to convince folks that we could.”

GRACE is able to make accurate measurements thanks in part to two advanced technologies: a microwave ranging system based on Global Positioning System (GPS) technology, and a very sensitive accelerometer—an instrument that measures the forces on the satellites besides gravity (such as atmospheric drag).

The microwave ranging technology came from NASA’s Deep Space Network, designed by engineers in Watkins’ group at JPL. “The antennas on GRACE are based on the design of the antennas that track spacecraft at Mars and Jupiter,” says Watkins. The new ranging system was so accurate that an antenna on each satellite could allow it to track the other’s minutest movement. GPS satellites and receivers on the ground provided additional measurements of the satellite locations.

During each 95-minute orbit, the distance between the GRACE satellites varies by about 2 kilometers (1.2 miles). Instruments aboard the satellites measure the separation to a precision of one micrometer (0.00004 inches). (NASA graph by Robert Simmon and Kevin Ward, using GRACE data from the JPL Physical Oceanography DAAC.)

The accelerometer measures the forces that move the satellite by pushing on its surface. “The measurement allows us to correct for anything that is related to drag or solar pressure, leaving just gravity,” says Watkins.

Together, these very precise measurements of location, force, and orbital change translate into an observation of gravity with unprecedented accuracy. Unlike most satellites, which are put in a carefully controlled orbit, the GRACE satellites were launched into a high orbit and then largely left alone. Flight engineers only maneuver the satellites if they separate by more than 250 kilometers. As the satellites circle the Earth, the ranging technology tells scientists exactly where each satellite is relative to the other. Supercomputers and scientists compare the positions of the satellites relative to each other and to previous orbits, noting every variation.

To relate changes in satellite motion to changes in gravity, Bettadpur and his team start by examining what the satellites’ paths ought to look like. They know where the mountains are, and where the oceans grow deep. They know the path of the Sun and the Moon, and the related fluctuation of ocean tides. They know what large weather systems have moved through the atmosphere. And they can determine how much all of these things should pull on the satellites.

The researchers use mathematics and fundamental laws of physics to translate measurements of the satellite paths into measurements of gravity, and the equations are as old as Isaac Newton. Sir Isaac invented calculus to solve his equations; the GRACE team needs a supercomputer. Located at the Texas Advanced Computation Center, a supercomputer crunches billions of arithmetic operations on half a million new observations collected every month. The end result is a single set of numbers that represent how much gravity has shifted compared to previous months. 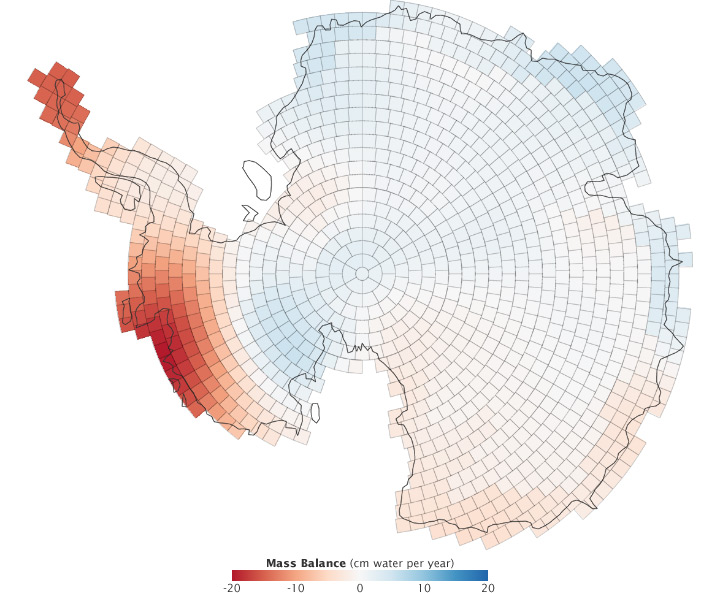 “The distance between the satellites changes by two to three kilometers during one turn around the Earth,” says Bettadpur. “And we can account for all but a few millimeters from what we already know. What we don’t know are things like the water cycle on land or the changing ice sheets, but we think these cause the little bit of motion we can’t account for.”

In the decade since its launch, GRACE has observed a number of significant changes in the water cycle. GRACE revealed losses in ice mass on Greenland (where the loss is dramatic), Alaska, and Antarctica. The gravity measurements revealed how much the melting glaciers are contributing to sea level rise by recording both ice lost from land and the mass gained in the ocean.

California’s Central Valley is one of the areas where GRACE detected a decline in ground water reserves since 2003. (Graph adapted from Famiglietti et al., 2011.)

Looking at changes in groundwater levels over time, Rodell and Famiglietti have identified a disturbing trend. “GRACE shows where people are using more water than is naturally available or sustainable,” says Rodell. “Scientists predicted this trend based on what we know about water use. But until we had GRACE, we couldn’t quantify it very well for many parts of the world.”