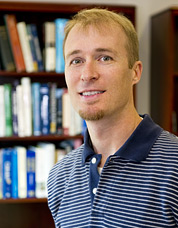 “Hydrologists were slow to embrace GRACE because its data were unlike anything they had ever seen before,” says Rodell. GRACE isn’t a probe that can be buried in the ground to measure water directly. It isn’t even a standard satellite that takes pictures of the ground.

In fact, raw data from GRACE are nothing but a series of measurements showing how far apart two satellites are. The twin satellites follow each other in orbit around the Earth, separated by 200 kilometers (120 miles) or so. They constantly send microwave signals to each other to measure the distance between them.

On a more sophisticated level, GRACE measures gravity, the force that anchors us to the planet. Gravity is an attraction between two objects—such as a human and the Earth—and its strength varies depending on how much mass those objects have and how far apart they are. For example, the tug of gravity is weaker for a person on the Moon than on the Earth because Earth is more massive.

“GRACE is not looking at the ground,” says Famiglietti, now at the University of California-Irvine. “It’s feeling the ground.” 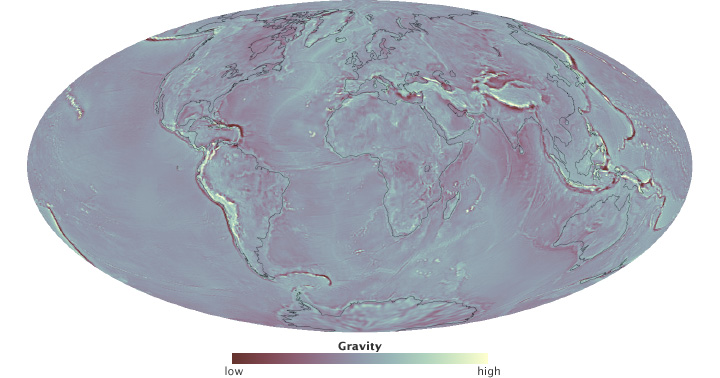 Earth’s gravity varies from place to place, determined in part by elevation, the thickness of the crust, and the density of different substances. (NASA map by Robert Simmon, using data from the International Centre for Global Earth Models)

Our senses perceive gravity as constant on Earth, but it actually varies slightly from location to location; it also changes as mass shifts. When the GRACE satellites encounter a change in the distribution of Earth’s mass—say a huge blanket of fresh snow on California’s Sierra Nevada—they are pulled toward the mountains a tiny bit more than normal. The leading satellite responds first, changing the distance between the two satellites. Instruments on the satellites record this change in separation to within one-one hundredth of the width of a human hair. By tracking trends in how the satellites’ orbits change, scientists and engineers can calculate how gravity is changing on Earth.

So when groundwater supplies dwindled in the southern United States in 2011, that region of the planet had a little less mass. The satellite orbits moved a bit in response. GRACE data revealed the change in groundwater storage to Wardlow.