Close-Up on the United States

“Resource managers need to see forests down to the disturbance resolution—the scale at which parking lots or developments or farms are carved out by deforestation,” says Josef Kellndorfer of the Woods Hole Research Center (WHRC). His research team recently took it down to that level when they released the National Biomass and Carbon Dataset (NBCD) for the United States in April 2011. 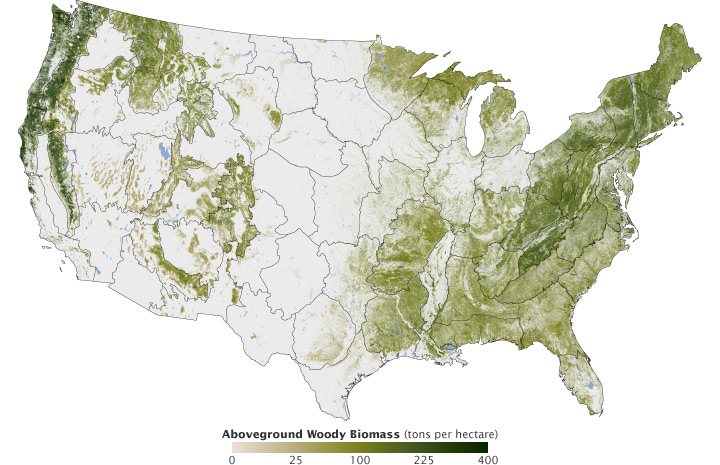 “We are providing information on a management scale,” Kellndorfer notes. Forests in the U.S., as well as their carbon content, are mapped down to 30 meters, or roughly 10 computer display pixels for every hectare of land (4 pixels per acre). “This data set is a comprehensive view of forest structure and carbon storage, and it provides an important baseline for assessing changes in the future.”

Over six years, Kellndorfer, Wayne Walker, and their Woods Hole team collaborated with the U.S. Forest Service and the U.S. Geological Survey (USGS) to assemble a national forest map from space-based radar and optical sensors, computer modeling, and a massive amount of ground-based data. They divided the country into 66 mapping zones and ended up mapping 265 million segments of the American land surface. Kellndorfer estimates that the mapping database includes measurements of about five million trees.

The researchers started with data from the Shuttle Radar Topography Mission, which was flown on the space shuttle Endeavour in 2000. With that space radar, the USGS and NASA’s Jet Propulsion Laboratory constructed topographic maps of nearly all of Earth’s land masses from 60 degrees north latitude to 60 degrees south.

By 2005, Kellndorfer deciphered signals (the scattering surfaces) in the electromagnetic waves detected by the radar—data that revealed the height of the vegetation. Subtracting the height of the treetops from the elevation of the land, the scientists could estimate the height and density of the woody plants, trees, and shrubs covering the surface.

But those numbers were only the beginning. Kellndorfer’s team combined their data with the National Land Cover Database, which was built from Landsat satellite images of Earth’s surface. They examined the biology and geology of their picture. How do different land elevations affect the height and thickness of trees? What can and cannot grow at certain elevations?

The last piece of the puzzle was ground truth. Kellndorfer enlisted the aid of Elizabeth LaPoint and colleagues in the Forest Inventory and Analysis program of the U.S. Forest Service. The federal foresters keep a census of the nation’s trees, maintaining a survey plot for every 6,000 acres of woodland, and measuring the trees within that plot at least once every five years.

Those plots, however, are not available for direct survey or study by Kellndorfer or anyone outside the service—a safeguard to protect the integrity of the data set and the rights of private property owners. So the Woods Hole team prepared thousands of data sets with 15 to 20 variables that LaPoint could compare to the forest inventory. 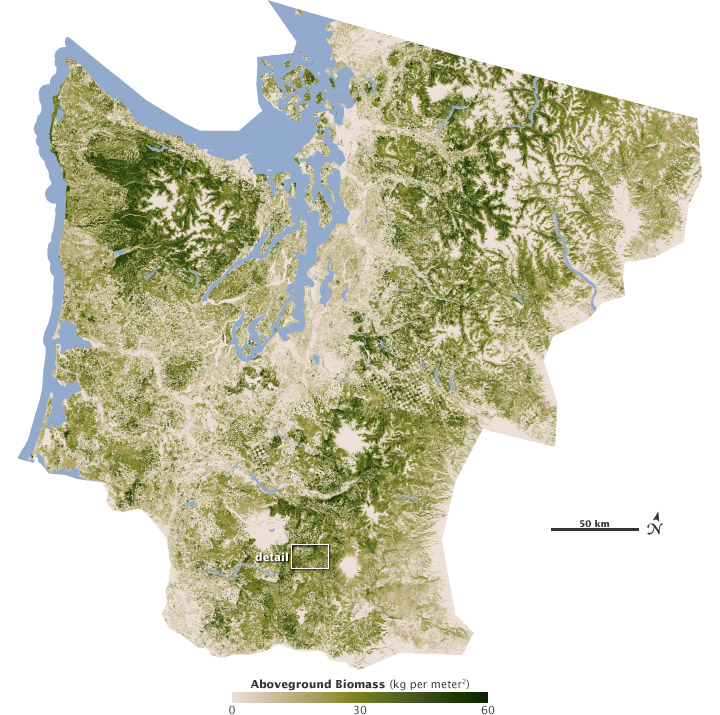 The NBCD is divided into 66 ecoregions. The zone corresponding to coastal Pacific Northwest has the densest biomass in the United States. (Map by Robert Simmon, based on data from Woods Hole Research Center.)

In the end, the research team was able to construct a map with higher resolution and more precise detail than any large-scale map of forest biomass ever made. The map reveals the checkerboard patterns of logging in the old growth of the Pacific Northwest and the highly managed tree farms of the Southeast. In the Midwest, trees outline the rivers and the edges between farms, while forests re-emerge on land that was once cleared for crops. In the Mid-Atlantic and New England, lands that were stripped bare in the early years of the nation are now tree-covered again—though with many urban developments amidst the forest. 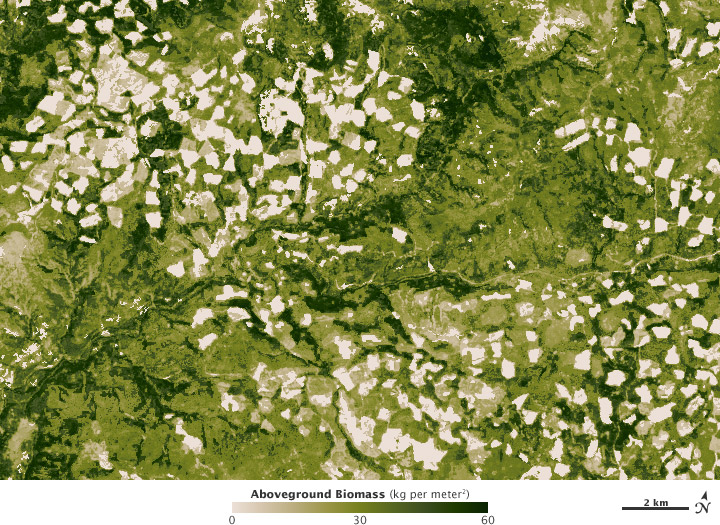 At full resolution, the NBCD shows logging on the scale of individual plots. (Map by Robert Simmon, based on data from Woods Hole Research Center.)

“Forests are a key element for human activity,” says Kellndorfer. “So we have to know how much we have, and where, in order to conduct sound management and harvesting. This map gives us another tool to see our precious resource.”