There are things you can do at the South Pole that you can’t do—or do as well—anyplace else on the planet.

For instance, telescopes can track celestial objects for long periods of time from exactly the same place through air totally devoid of light and particle pollution. Because the air is so dry, it is also possible to listen to the sounds of the Big Bang—cosmic microwave background radiation—nearly 14 billion years old. The air is so clean—possibly the cleanest on the planet—that it can be used as a baseline to watch changes in the atmosphere on this planet. 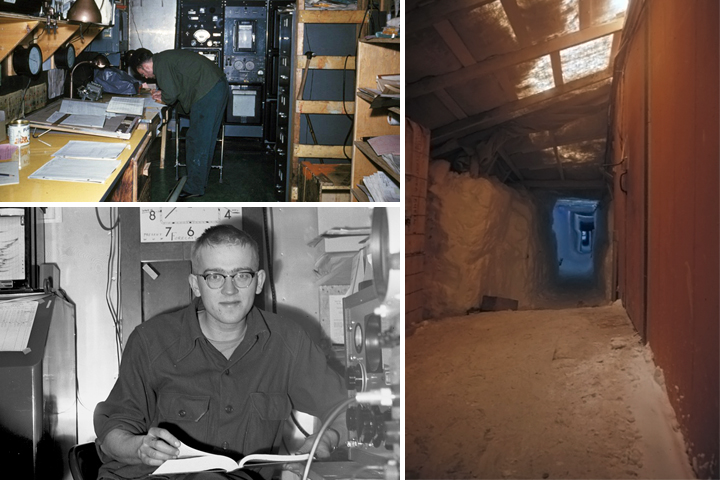 Science observations were recorded in the meteorology station (top left), while the seismometers were connected to the building by a 1,000 foot tunnel through the ice (above). Without sunlight or room to roam, Benson (lower left) and others had plenty of time for reading. (Courtesy of Bob Benson and Cliff Dickey.)

Bob Benson helped set up two science stations in this natural laboratory. A geophysicist was using a seismometer to plot earthquakes from around the world—the Pole is an excellent place to do that—and he needed help. Benson was drafted. The seismometer recorded not only earthquakes—including many from as far as the Aleutian Islands—but the cycles of the electric generators at the station.

His other job was to monitor and study the ionosphere, the electrically charged part of the atmosphere above 60 kilometers (40 miles) altitude. He used a device called an ionosonde, which sent radio waves of various frequencies toward the atmosphere. From the received echoes, he could measure the height and density of the ionosphere. 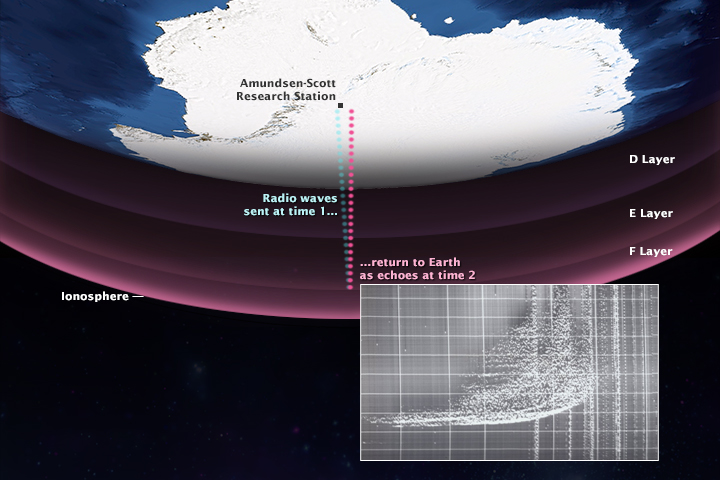 Benson analyzed echoes of radio waves reflected from the upper atmosphere in order to determine the height and density of the ionized layers, as shown (inset) in this 1957 ionogram. (Illustration by Joshua Stevens, NASA Earth Observatory. Data photo courtesy of Bob Benson.)

Full of particles energized by sunlight, the ionosphere reflects radio waves. But in 1957, some scientists wondered if the ionosphere would gradually disappear when the Sun went down for six months. That posed a problem because the South Pole team was planning to communicate with the rest of the world by bouncing radio signals off of the ionosphere. If they could not use these radio techniques, the station would be totally isolated during the winter, adding dramatically to the danger. 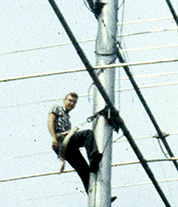 Fortunately, they found that the ionosphere was intact despite the darkness, and it allowed them to set up a unique radio relay system. They sent out transmissions to see if anyone would hear them, and many ham radio operators responded—but none more regularly and reliably than 16-year-old Jules Madey of Clark, New Jersey. Madey and his 13-year-old brother, John, captured those long-distance radio signals. With the enthusiastic support of their parents, the Madeys built a 110-foot radio antenna in their backyard. Soon the South Pole science team came to rely on those two teenagers (and a few other amateur radio operators) to place long-distance telephone calls so they could communicate with family and friends in the United States.

Besides learning to use the ionosphere for radio relay, Benson and colleagues discovered that the ionosphere followed a 24-hour periodicity, even without sunlight. It was the first of many ionospheric observations in Benson’s career.