On his fatal trek to the Pole, Robert Scott described it dramatically. In the journal that was found with his frozen body, Scott wrote: “Great God, this is an awful place.”

The Antarctic is the coldest, driest, windiest place on Earth. The continent is nearly twice the size of Australia and almost entirely covered with ice. While Antarctica has huge mountain ranges, they are mostly buried in ice that is almost two miles thick. Though snow and ice abound, the area is technically a high desert. The Amundsen-Scott South Pole Station sits 2,900 meters (1.8 miles) above sea level on a vast, flat plateau.

It is dark for half of the year. When the Sun is up, the sky and the ice are bright and stark, stretching out forever in the crystal air. The place is as breathtakingly beautiful as it is dangerous.

How cold was it in 1957? During construction, with temperatures hovering at about -60° Fahrenheit (-51° Celsius), the bubble in the carpenter’s level would not stay liquid. Someone had to put the level inside his coat, run inside, and let it thaw sufficiently to make it useful again. He then ran back outside before it refroze. 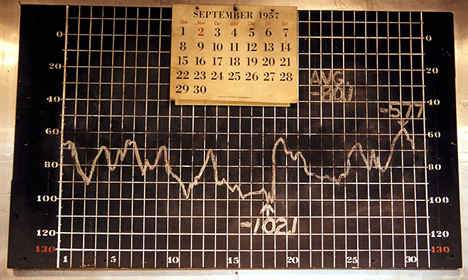 The South Pole party logged temperatures daily, and they never got close to the melting point. The record low for the winter was set just a few days before sunrise. (Courtesy of Bob Benson.)

The science party kept track of the temperatures throughout the year, and the mercury never rose above zero. On September 18, 1957—near the end of the austral winter and just before sunrise on September 23—the temperature dropped to -102.1°F (-74.5°C), the record for that year.

The science operation was run by geographer Paul Siple, a legend in Antarctic exploration who had made his first trip to the frozen continent as a Boy Scout accompanying Admiral Byrd in 1928. By the time Siple was leading the expeditions, he had a beard so long that it would freeze to the zipper of his parka. He had to stand over a room heater to thaw it before he could take his coat off. 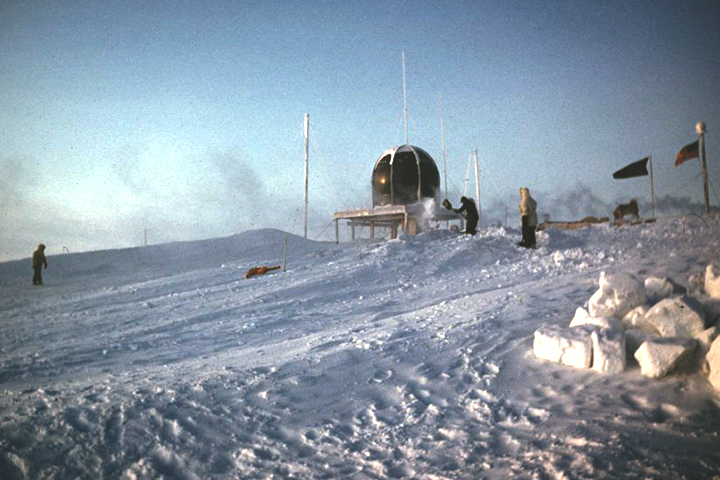 After the Sun rose again in September, the team started to dig out from the winter accumulation of drifted snow. (Courtesy of Bob Benson.)

The buildings at the first South Pole Station all stood above ground, but they were connected by covered tunnels. Temperatures in the tunnels were about -50°F (-46°C). One building was intentionally located 200 feet away from the others. It was the Jamesway (or Quonset hut) that would be used in case the worst happened (ironically, fire). Everyone had a duffle bag full of what they would need in case they “lost the station.”