No One Wore Seat Belts

Benson’s adventure began in the fall of 1956. He went first to Boulder, Colorado, to learn how to interpret ionospheric data. Next he went by air to Christchurch, New Zealand, where the United States maintained (and still does) an Antarctic supply and administration station. From there, he was supposed to fly to McMurdo, the base set up by Byrd on the Antarctic coast. But it was not to be. Because of unusually warm weather, some of the ice on the runway had melted, forming potholes. Instead, Benson and colleagues traveled to Antarctica by ship.

Then they got stuck at McMurdo because the runway still was not frozen enough. People had to shovel snow into the potholes, and then let it refreeze and harden enough for planes to land. It was not a minor matter. Most of the winter-over group was already at the South Pole, but they were running low on supplies.

The U.S. Navy used R-4D planes outfitted with skis to shuttle men from coastal bases to the South Pole station. When they couldn't land with supplies, the U.S. Air Force dropped them from C-124 Globemasters. (Courtesy of U.S. Navy and NSF.)

The scientists finally took off for the Pole in a Navy R-4D, the military version of the legendary DC-3. The plane was rigged for landing on skis. “The plane was so fully loaded that the maximum altitude was about 10,000 feet, which is the same altitude as the Pole,” Benson recalled. “You just fly straight and the Pole comes up under you.”

The airplane’s load was so finely balanced that when one passenger moved to the back to get a loaf of bread, the plane started losing altitude. He was chased back to the middle of the plane. Everyone huddled around a gas tank. No one wore seat belts.

When they got to the South Pole, the pilot feared he would not be able to take off again, so he kept the engines running. The temperature was -20° Fahrenheit (-28° Celsius), and it was February 12, 1957. 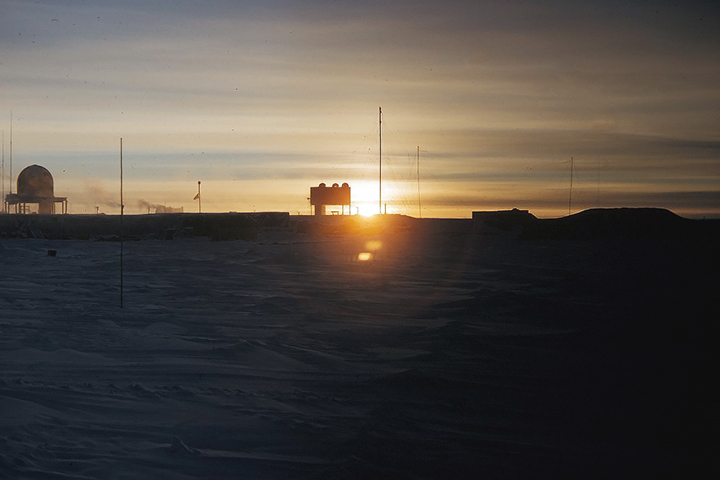 The Sun would go down for good on March 21. Benson quickly learned about living on the edge.