The golden age of world exploration wound down in the beginning of the 20th century with a series of expeditions to the Antarctic. Ernest Shackleton attempted and failed to reach the South Pole in 1908. Robert Falcon Scott made it in 1912, only to find a Norwegian flag already planted there by Roald Amundsen. Scott’s team died on the return.

After World War I, those with an itch to explore new territories had a new tool: the airplane. Rear Admiral Richard Byrd flew three expeditions to Antarctica and became the first to fly over the Pole. Up to that point, it was mostly a place for adventurers and explorers. Little science was done there.

Then came the International Geophysical Year (IGY). Scientists from around the world designated the period from July 1957 through December 1958 to be a time for international collaborative efforts to study our planet. As part of the effort, the United States pledged to build a permanent station at the geographic South Pole.

At the time, Bob Benson had just finished his bachelor’s degree in geophysics at the University of Minnesota. He was keenly interested in physics and astronomy, and he put in an application to go to the South Pole. (His older brother, Carl, was a glaciologist and kept making expeditions to Greenland because science is what the Bensons did.) Bob Benson was initially told that his IGY application was too late; all of the positions were filled. But a few weeks later, he received a telegram that a slot had opened. If he wanted it, he had better pack immediately.

“I had just started my graduate work in physics,” he said. “I knew I would gain experience in several areas of science related to the polar regions, and I knew it would be a once-in-a-lifetime opportunity.” Professionally speaking, the choice was easy. But he also admits he was interested for the sheer romance of the place. 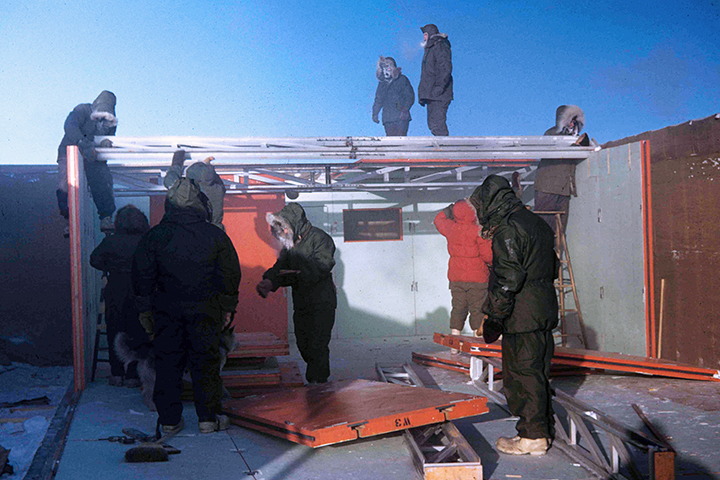 Though the U.S. Navy SeaBees dug out the foundations and constructed most of the buildings, the South Pole team had to build barracks before settling in for science. (Courtesy of Bob Benson.)

Benson recalled that everyone else on the team had gone through psychological and psychiatric testing to make sure they would not commit suicide or homicide while being confined to a restricted space for six months without sunlight. It was too late for Benson to take those tests, so he was interviewed by Willie Hough—the person he would be working closely with at the South Pole—who felt that Bob would be OK.

The science party was not first on the scene. The foundations of the camp were dug out by the SeaBees, the U.S. Navy’s construction engineers, and nearly all the buildings were up by the time Benson arrived. The task for the scientists was to put the finishing touches on the barracks and the base, and then turn it into a permanent, working scientific station. They were to start conducting research that first winter. It would not be easy.