The wind began to blow at approximately 1:00AM on December 20. In Antarctica the wind blows most of the time, as there is nothing to slow it down and air is continually shifting from location to location due to density. But this was different: The force of the wind was strong enough to cause our tents to shudder continually, making it very hard to sleep. Snow began drifting around the tents, and packing between the tent body and fly. The force of the wind would even drive snow through the tent body, so that it showered down upon you.

At 6:30AM, Clem stopped by my tent to let me know that we would not be traversing to site 5 that day, as the weather was so bad. Following breakfast ,we began to build snow walls to protect the tents from the force of the wind. A flag line was put up to guide us from tent to tent in the event visibility dropped below 10 feet (3 meters). We checked the sled loads to make sure they were tied down well, and tightened all of the tent guy-out points. By noon the wind was blowing even stronger.

A small portable weather station that we had with us recorded wind speeds of 35mph (56 kph) with a wind chill temperature of -32 degrees Celsius (-25.6 degrees Fahrenheit). Noting to do but hunker down and read or sleep. The wind did not change all day long, except to increase and decrease slightly in speed. Every slight ebb of the wind strength would give us the hope that it was ending, only to have those hopes dashed at the next strong gust. 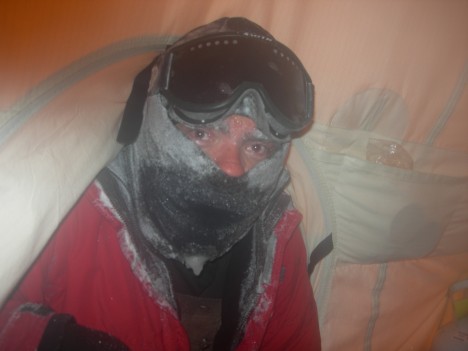 We awoke on the morning of Dec. 21 to more of the same. Drifts of snow around our tents were 3 to 4 feet high (0.9-1.2 meters). The wind had scalloped out snow in other places making walking around camp treacherous. Mac-Op’s assured us that we should start to see improvement later that day, so we were hopeful that we would not have to re-build our eroding snow walls. The rule of the day was to dig. Every time I, or anyone else was out of their tent, we dug the snow away from our own tent and then the others’. This was to keep the doors open, and the tent from being collapsed by the weight of the accumulating snow. 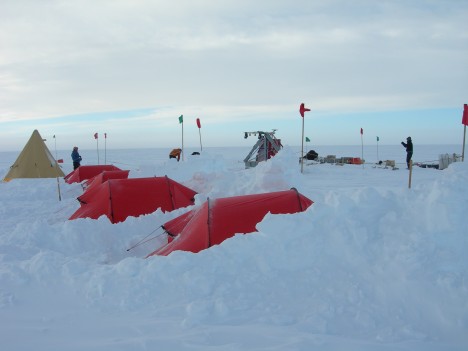 By 8:00PM the wind had dropped enough that we began digging 2 to 3 feet (0.6-0.9 meters) of snow away from the sleds, and unpacking the snow from the engine compartments of the snow machines. We worked for several hours to free all of the equipment so that it would be ready to traverse in the morning. 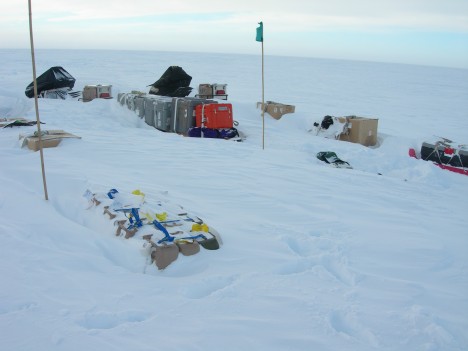 The storm on Dec. 20 was great practice for the storm that came on the evening of Dec. 23. Just as we finished dinner the wind picked up noticeably to around 30mph (48 kph). We had built a long continuous snow wall behind the tents as we sat up camp the day before. The wind had drifted snow all the way to the top of our 4-foot wall, and snow was now drifting between the tents. Ludo and Clem set to work to make the wall higher and dig the drifts down.

In the morning of Christmas Eve, the wind was stronger than at any time during the first storm. Clem commented that this was possibly the worst polar storm he had ever been in. This coming from a man on his second trip to Antarctica, as well as having spent time in Greenland did not comfort me very much. By evening time the wind was gusting in excess of 50mph (80 kph). Blowing snow limited visibility to less than 25 feet (less than 8 meters), and the wind chill was at -48 degrees C (-54 degrees F). Drifting snow had mostly buried Jessica’s tent, and we abandoned it and she moved into the Scott Tent for the night. 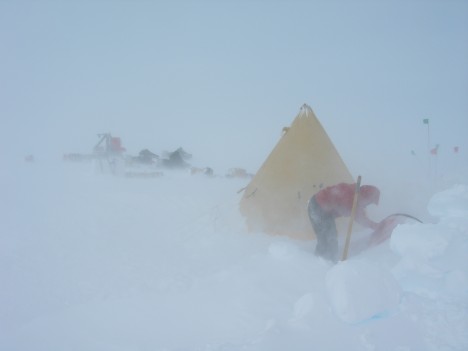 Christmas Eve was cancelled due to weather.

Christmas morning was more of the same. The snow was drifting so bad that the restroom myself and Ludo had built was no longer useable. Someone was getting out of their tent every 2-3 hours to dig out the other tents. Snow drifts around one tent became so bad the tent appeared to be in the bottom of a small snow-coliseum. 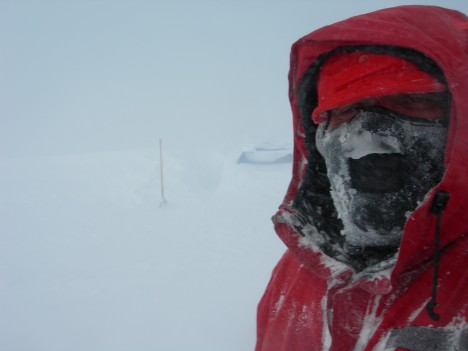 Fortunately for us, Mac-Op’s assured us that we were on the edge of the storm.

By the evening of Christmas Day the wind of the second storm had begun to slack in strength, and once again we began to dig ourselves out. Because of things we had learned from the first storm, the sleds and snowmobiles were not as packed with snow, even though the storm was stronger. The tents however were nearly buried, and removing some of the dead-men anchors was very time consuming. 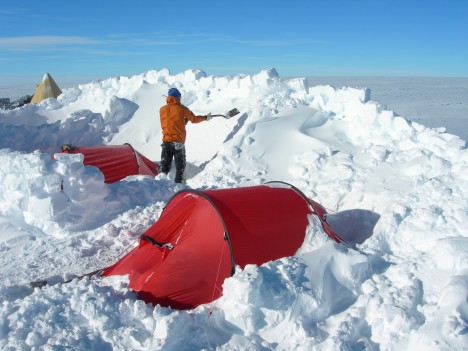 Fortunately we did not have the opportunity to use again what we had learned about pitching the tents during the second storm, as this was our last bit of bad weather.