Picking Up the Snow Cores from the Field

Once the traverse was over and we had drilled nine snow cores (with a combined length of 156 meters, or 512 ft), the next step was flying to each of our drilling sites and bringing the cores to the West Antarctic Ice Sheet (WAIS) station to store them before they are shipped (hopefully soon!) to McMurdo and then to Bringham Young University for our analyses.

Three days before we completed our traverse, Michelle initiated talks with the flight schedule team to coordinate pickup dates for the ice cores. Usually, there are three planes operating from Byrd Station: two Twin Otters and a Basler. However, during the weeks following our traverse, there was only one Twin Otter available and it had to be shared with other scientific missions. In the end, the flight schedule team decided to assign us a flight on December 30th .

However, on the 28th, the morning following our arrival to Byrd, the Twin Otter pilots’ weather check at 7 AM revealed that it was impossible to fly another scientific mission planned for that day due to possible fog. They decided they would check the weather forecast again at 10 AM and probably fly our mission instead.

Meanwhile, Randy and Jess were reading in their tents, Clem was somewhere, looking for his brand clean pair of socks, Michelle and I were shoveling snow… yes, it seemed like we weren’t able to stop shoveling even after the traverse was over. Suddenly, Tony, the Byrd Camp supervisor, informed us that the pilots were going to perform our mission in the following half hour! This was excellent news.

The half hour gave us some time to drive 3 kilometers (1.86 miles) out of Byrd to dig out the first 18 core segments (each one of them about one meter, or 3.3 feet, in length) we had drilled three weeks before. Randy and I jumped on a snowmobile and headed there, while Michelle and Clement attached a sled to their snowmobiles to bring the cores to the plane, and joined us a few minutes later. We had to drive very slowly to make sure the cores didn’t get damaged during the ride. 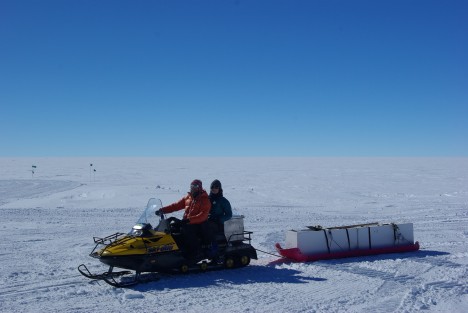 As I mentioned, the plane that was going to help us was a Twin Otter, which is smaller than the Basler that flew our cache with Lora the day after we started the traverse. Due to its smaller size, we would not be able to collect the 18 boxes and five fuel drums at the same time. We would have to fly first to three sites, fly back to WAIS station to deliver the cores (just on time for lunch!) and then fly to the three remaining sites, heading back to WAIS at around 4 PM.

Using our site GPS location coordinates, it was extremely easy to find the orange fuel drums that marked the sites, and then locate the buried snow core boxes. 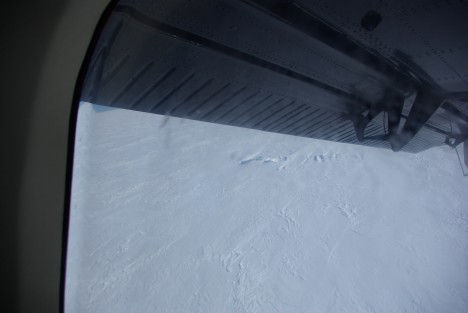 At each site, the pilot flew over the place one to four times before landing, to determine the best landing spot. That gave us a chance to enjoy our itinerary and former camps from above! 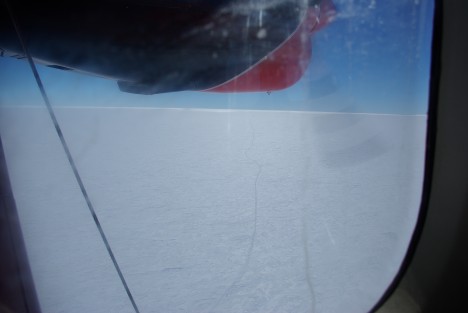 Once on the ground, the plane taxied until it got right next to our cargo, which made it super easy to carry the core boxes and drums inside. Once the plane stopped, it was our turn to work. And by work I mean shoveling snow! By then, I was beginning to consider shoveling to be more of a hobby than work. We had to carefully dig out the snow core boxes and bring them and the fuel drum inside the plane as quick as possible. It was a great day, and I believe we were pretty efficient; it never took us more than 20 minutes between landing and take off. 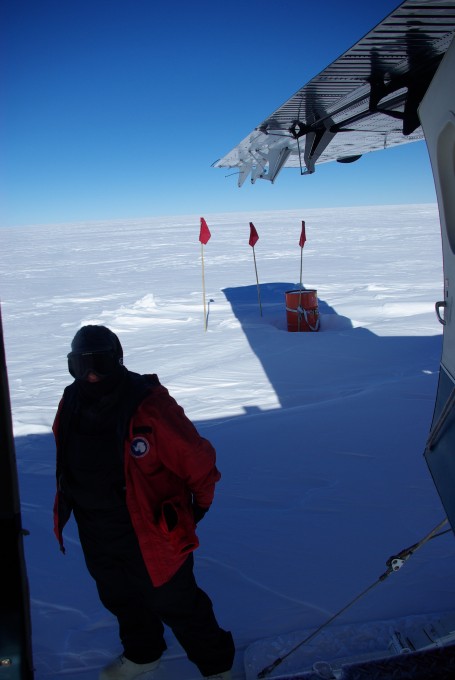 Because we were in an open field, the pilots had to taxi back and forth on its own tracks a couple of times, to compact and smooth the surface before taking off. Once the pilot and co-pilot were satisfied with the consistency of the snow beneath, they would push the accelerator. 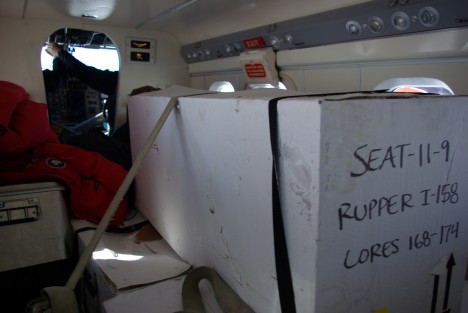 Between each site, we flew at low elevation (100 m). It was incredible to see some of our traverse legs from above, and even though we had encountered some pretty breezy days during the previous weeks, it was still possible to see our snowmobile tracks in some places.

After visiting three sites, it was time to fly back to WAIS Station. The plane was full, and heavy! This last take off seemed longer (much longer) than the previous ones… and definitively bumpier too.

After about 20 minutes in the air, we saw WAIS Station appear on the horizon. 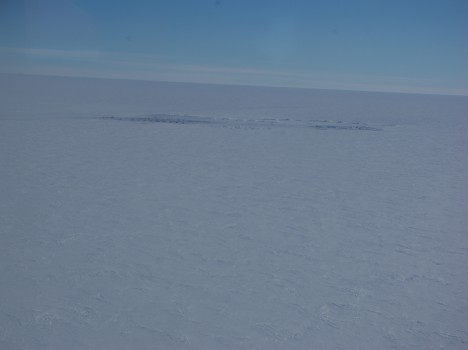 It was a strange feeling, to see a man-made structure appear in the middle of nowhere. It reminded me of the way I felt while, during the traverse, we were looking for our cache, and suddenly there it was, sitting in a great white vastness.

Five WAIS staff people were already on the ice waiting for us, or, more probably, they were waiting for the core boxes to bring them quickly into the freezer. 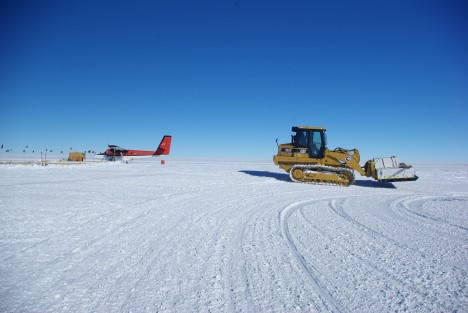 After a good lunch at WAIS, we continued our ice core picking. By 4 PM, all cores were stored in the WAIS freezer. After then, the 2011 SEAT field work was truly completed. We had stayed safe, we hadn’t broken anything (or at least nothing vital than couldn’t be fixed), and we had had a fantastic life experience that will also help us better understand snow accumulation over West Antarctica!

Fair warning: Keep in mind that the ice cores still had a long way to go before reaching their final destination, the freezers at Bringham Young University!

Synopsis of the Traverse 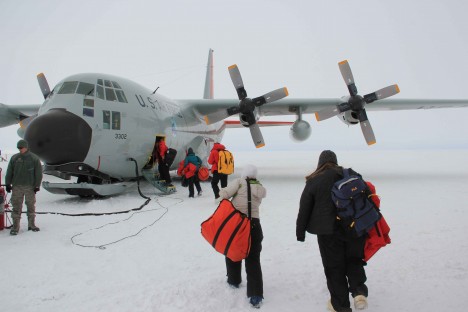 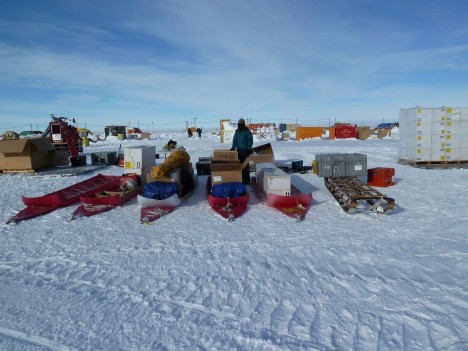 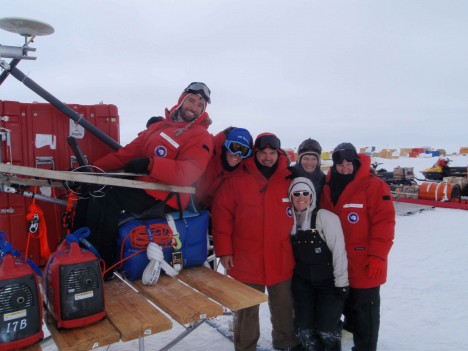 The traverse lasted 18 days, with the longest time spent at camps 4 and 5 due to the storm delays. Otherwise, we moved fast! We spent an extra day at camp 3 to drill a second ice core, but by the end of the trip we were such fast drillers that we were able to drill two cores in one day at camp 6. We drilled ice cores at nine different sites (including Byrd Station), dug and sampled 6 snow pits, and collected more than 500 km (310 mi) of radar data.

Back at Byrd, we broke down our gear and with the help of the Byrd cargo handler we had it all packed on palettes in one day. Ludo and Jessica went by Twin Otter to pick up the ice cores on the day after we returned to Byrd so that soon after the traverse ended we were finished with almost all our work! In 18 days we finished all of our science, but to achieve these goals it took near seven weeks of travel and preparation – it is not easy to do work in Antarctica! 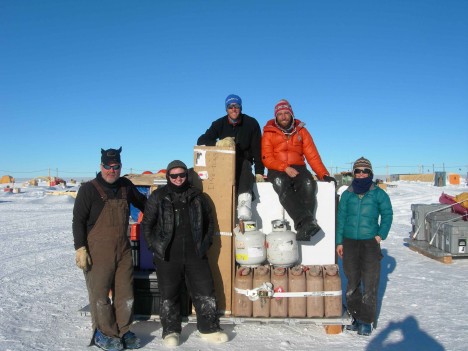 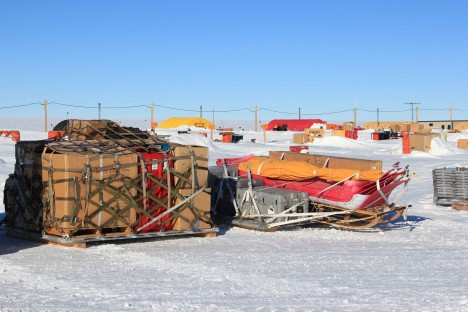 After the traverse was finished, we could not get a flight out of Byrd Camp back to McMurdo station for a few days so we enjoyed our time with the Byrd Camp crew and rang in the new year with a gorgeous dinner and dancing with the whole camp. Then we had a fast two-day turnaround from McMurdo to Christchurch. We all worked to clean and return all the gear we used in the field and ship all of the science equipment back to the U.S. It was very satisfying to complete all of our goals and finish on time despite weather and flight delays during the season. Great work, team!! 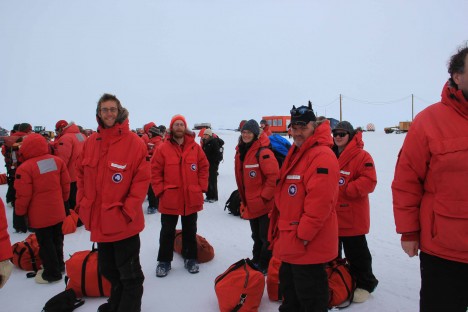