This summer a team of scientists from NASA Goddard, American University, and the Forest Service are conducting joint field work and flights with Goddard’s LiDAR, Hyperspectral, and Thermal Imager (G-LiHT) within south-central Alaska to study the ongoing spruce beetle outbreak and develop methods for early detection of beetle infestation. The spruce beetle is an aggressive bark beetle that feeds and reproduces in the inner bark of various species of spruce trees. Currently, spruce beetles are affecting over 400,000 acres in the Matanuska-Susitna Valley, resulting in widespread mortality of spruce trees. This infestation has been ramping up over the past few years in Alaska, causing concern for both scientists and Alaskans. Data collected by G-LiHT may provide the ability to detect early stages of infestation, before they would be visible in aerial surveys conducted by the Forest Service, which would allow forest managers and scientists to better predict future infestation locations and extent. 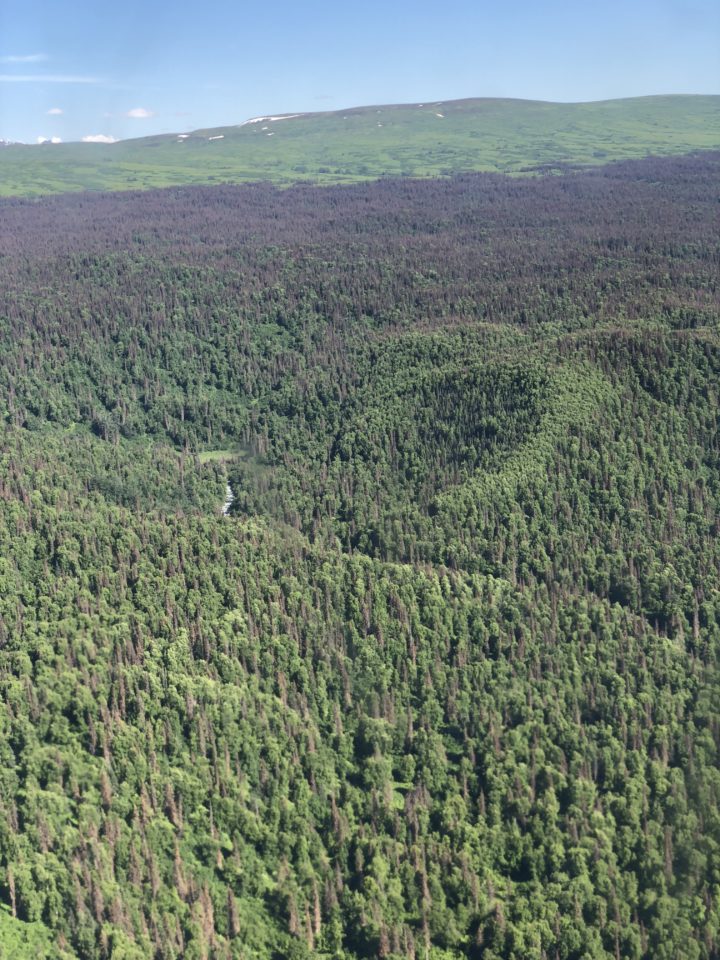 As we pass over the Susitna Valley we can see how far this outbreak has spread. The red-brown and gray trees have been infested for several years. Some of the green trees may be the early stages of spruce beetle infestation.

This past week we have been flying with G-LiHT and visiting areas where G-LiHT data was collected to identify and GPS trees infested with spruce beetles. The infested trees can later be located and analyzed within the collected imagery. This summer, the G-LiHT instrument is flying on a King Air A90. The pilots have to maintain an altitude of 1,100 feet for the best imagery, and this makes for quite an exciting ride over the various mountain ranges in Alaska. The swoops and dives the plane makes as it follows the terrain feel more like a roller coaster than a plane ride. 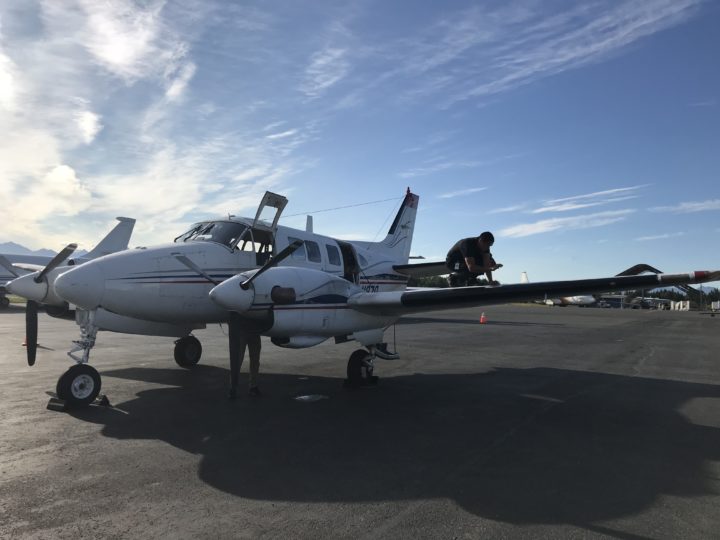 Our pilot Justice Pousson (on the wing) and co-pilot Sam Wilson (behind the propeller) work on the King Air A90 before take-off.

Outside the windows we get a full view of Alaskan landscape. We pass over the jagged peaks of the Talkeetnas into rolling spruce forests. From up here we can really see the extent of the beetle outbreak. Tendrils of red-brown and gray trees climb northward up the Matanuska-Susitna Valley. The red trees have likely been infested for over a year, and these needles will after three years turn gray and eventually fall off the tree. Though there are still some green spruce that we can see from the plane, there’s a good possibility that many of them are in fact already infested, as infested spruce trees generally maintain green needles for at least a year. The aerial Forest Service surveys can detect trees that have red or gray needles, but detecting trees that have only been infested for one year currently requires on-the-ground inspection of tree trunks. We are hoping these flights with G-LiHT will provide the imagery required to develop algorithms for green-stage detection. 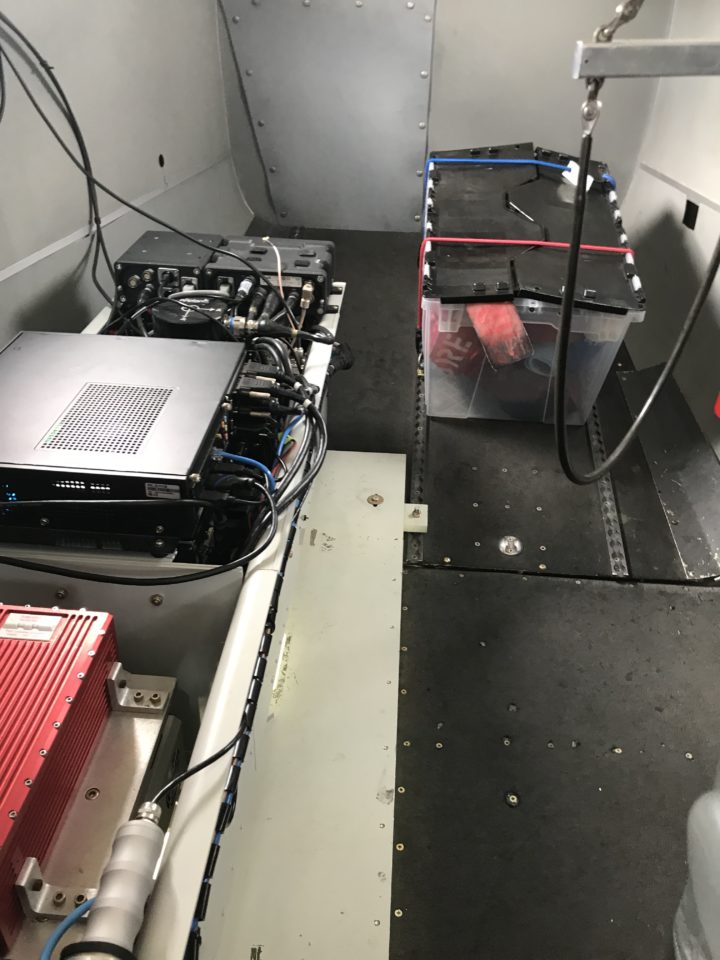 The G-LiHT instrument in the back of the plane. It includes a 3 cm camera and a hyperspectral, thermal, LiDAR, and solar-induced fluorescence sensor. 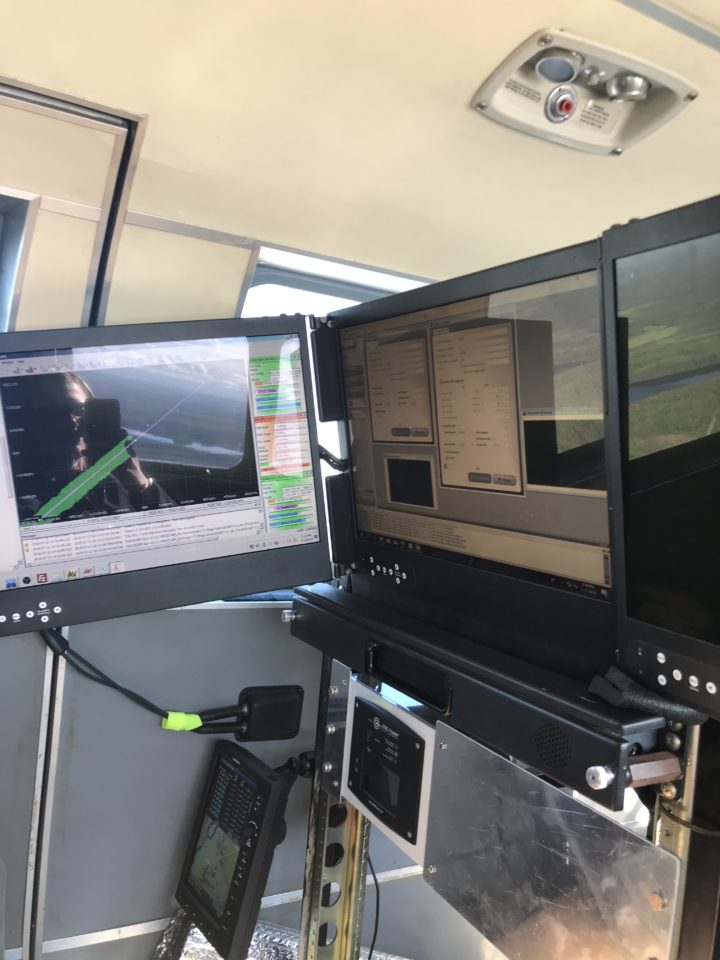 The computer used to operate G-LiHT during flights. We have to make sure we turn on and off all the sensors at the right times.

The weather sometimes prevents us from completing all of that day’s planned flight lines. On Thursday we had hoped the clouds that had been hanging low over the Chugach Mountains would dissipate as the day wore on, but we ended up having to turn back after only a few flight lines were collected. While this was disappointing, on the way back to the airport we got a spectacular view of Denali rising above the clouds.

As we transited home we got a great view of Denali to the west.

Earlier this week we drove north from our base at Alaska Pacific University in Anchorage towards Denali State Park, armed with a Trimble GPS, DBH tape, and plenty of bear spray. We stopped off where G-LiHT had flown overhead the previous week and found trees to GPS. As we made our way around moose droppings and hoped not to come upon any bears, we picked out the infested from the healthy spruce trees and measured their position and size. We can identify the infested trees by the characteristic globs of pitch-out sap running down the trees’ trunks as well as red-brown dust along the bark crevices and at the base of the tree. The sap is a defense mechanism used by the trees to trap and kill the attacking beetles. Young, healthy trees are usually successful at fending off these attackers, however older or more stressed trees often succumb to the beetles’ offensive. Swarming pheromones given off by the beetles attract others in a “mass attack” which can overwhelm the defenses of even the more vigorous trees. This snowballing effect of more and more beetles attacking more and more trees, which then leads to more beetles reproducing and attacking in subsequent years is the mechanism behind the growing spruce beetle outbreaks.

Back at the cabins where we are staying we relax by a campfire and grill steaks, veggies, and salmon. I’m still trying to get used to the sunrise and sunset times in Alaska. With a sunrise time of 4:50am and a sunset time of 11:20pm, it barely gets dark at all. On the plus side this allows us to stay out later in the field collecting data without having to worry about daylight hours. On the down side it makes it pretty difficult to discern the time of day (or when you should probably head to bed…). 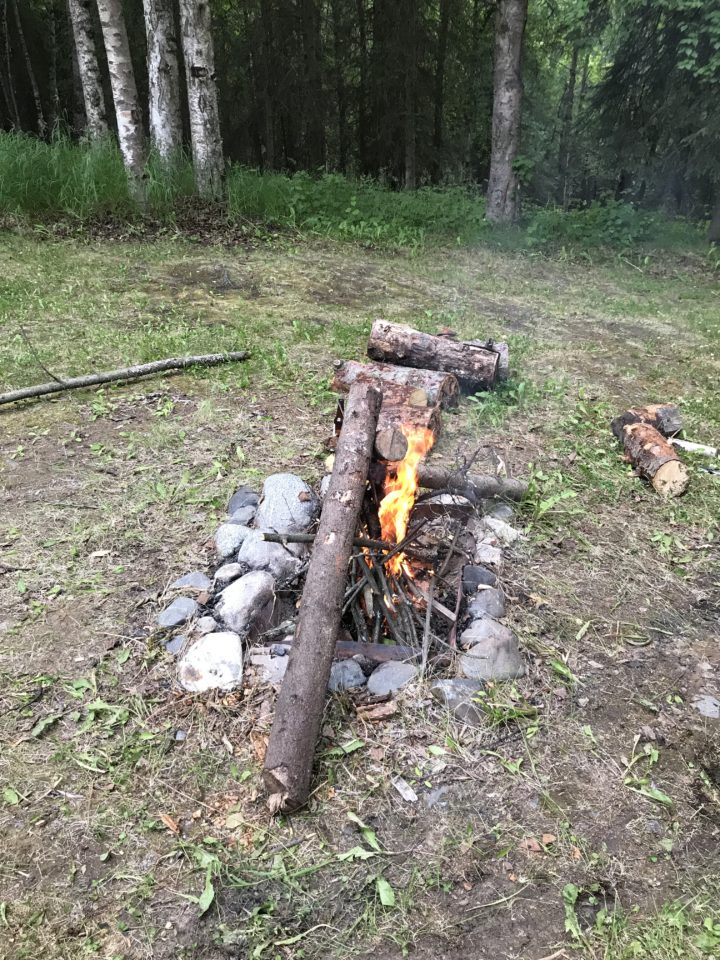 Our campfire (note: it was 9pm when I took this picture).

Next week we have more plans for field work, including flights with some unmanned aerial vehicles to collect data over the infestation areas. Also on my to-do list: more moose and other wildlife sightings! 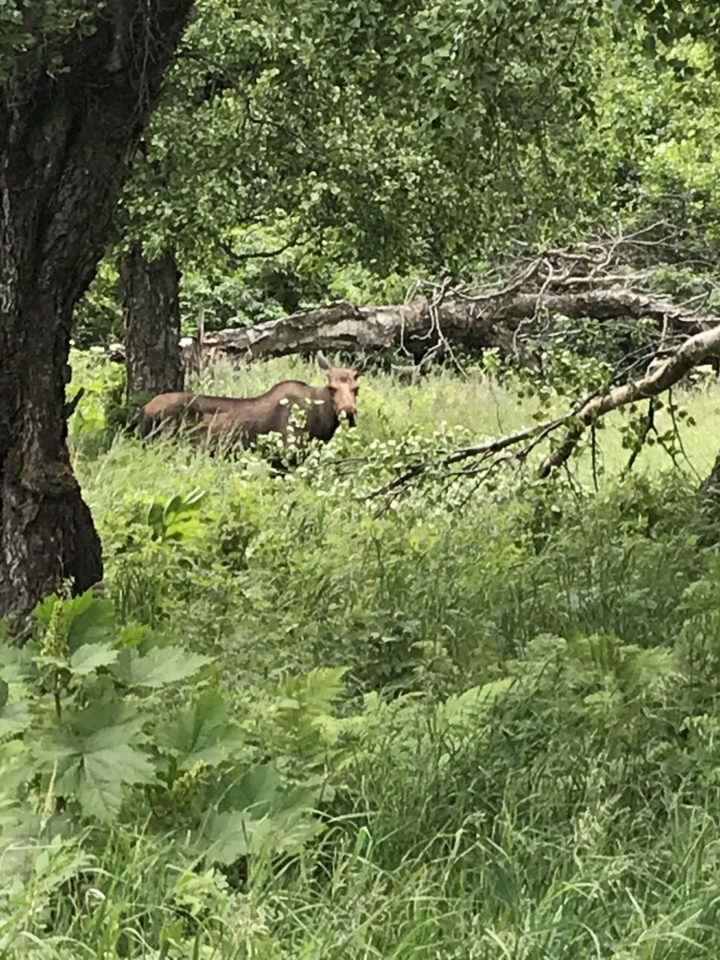 A moose we spotted during field work