As the ER-2 pilot got ready for his first flight out of Fairbanks, I wondered what it’s like piloting the aircraft, all by himself, 65,000 feet up. 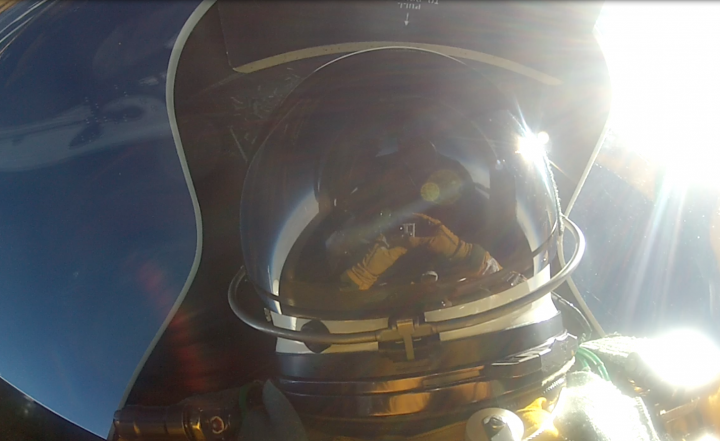 Denis Steele sets up a video camera in the cockpit of the ER-2, 65,000 feet over Alaskan mountains and glaciers. (Credit: Denis Steele/NASA)

The NASA ER-2 pilots for this campaign, Tim Williams and Denis Steele, are flying the MABEL instrument to study the glaciers and ice sheets. Before they fly, they have to get suited up. It’s quite a process. Because the altitude is so high, they need to wear pressure suits. I talked with expert NASA engineer technicians Raul Cortes and Ryan Ragsdale, who are veterans in testing equipment and prepping pilots before a flight to ensure safety.

The involved process starts the day before a flight, when Cortes and Ragsdale prepare the pressure suit. They check the pressure and make sure there are no leaks in the gloves, body suit, and helmet. They put the whole system together and inflate it, like a giant balloon character, to test that the suit will properly pressurize. 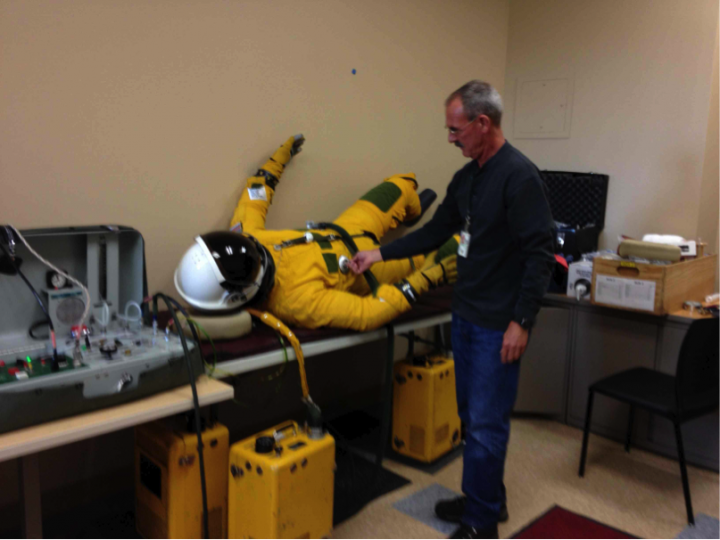 Engineer Technician Ryan Ragsdale of NASA Dryden inflates the pressure suit the day before to make sure there are no leaks. (No, there is not a real person in there!). (Credit: Valerie Casasanto/NASA)

The food is the consistency of pudding, and the straw feeds through a small hole in the helmet of their pressure suit. I asked what was on the menu for one flight. They have a choice that includes beef stroganoff, pears, caffeinated chocolate pudding (which happens to be Cortes’ and ER-2 crew member Luis Rios’ favorite). I was curious about this chocolate pudding, but given a free sample of the “pears” — which tasted like part baby food, part applesauce, with a pear afternote. 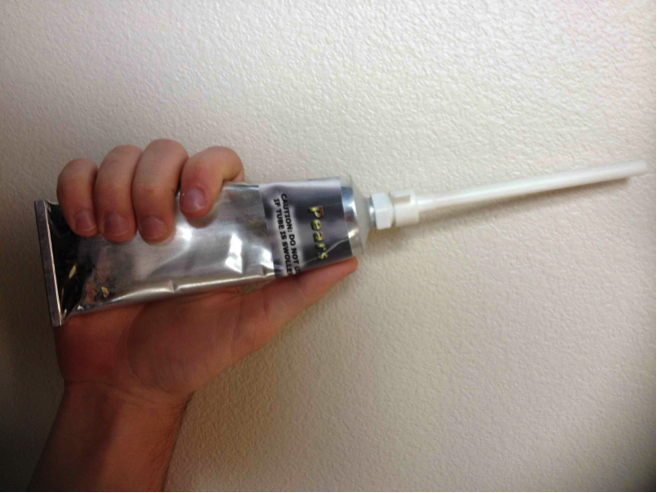 The caffeinated chocolate pudding used to be Williams’ favorite until he switched to the caffeinated apple pie. Mmmm, wonder if there are crusts in there too. When Steele first started flying, he ate the tube food. But sometimes it would get messy. One time a pilot was heating up a “sloppy joe” tube and it accidentally squirted out all over the cockpit. Now Steele just drinks water. You can easily dehydrate up there since you are breathing pure oxygen.

I thought it must be pretty confining in that suit with not much room to move, so talked with the Steele and Williams to see what the space is like for their 8-hour journey. The cockpit seemed to be about the size of half of a bob sled. Or, according to Steele, “if you throw a blanket over your head and body and lift your arms out a little, it’s that area between you and the blanket.” Just a little bit of room to move around, and a bit of leg room (unless a pilot is really tall). However, it doesn’t feel claustrophobic, Williams said, because they have good visibility.

When they’re up in the stratosphere, pilots keep a close watch on the plane’s instruments, Steele said. “You are always thinking – watching the instruments, doing science, mental math, calculations, thinking about what you would do in an emergency situation.”

They even do puzzles. On one flight last week Williams did Sudoku to keep entertained. You can also plug in to play music, although there are stories of colleagues playing tricks on the pilots, and programing in Disney music prior to flight.

Long flights at high altitudes do have effects, Steele said, and pilots need to be careful and not exercise too much after they land. 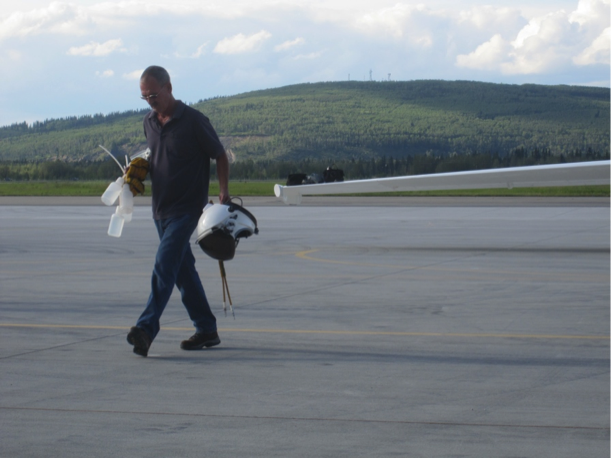 “Being at 60,000 ft. does drain you, especially if you are working hard,” he said. “The time you are working hardest is when you take off and land. The pilot does a lot of movements to keep the plane stable at low altitudes. It wears you out. But you get used to it, it’s like driving a car!”

Welcome to the LARGE (Langley Aerosol Research Group Experiment) blog.  We are a group of scientists at NASA Langley Research Center in Hampton, VA who study the chemical, optical, and microphysical properties of atmospheric aerosols and their effects on climate and air quality.  We are involved in many exciting experiments with vastly different objectives and applications, but this blog will begin by focusing on a project this summer/fall to assess the distribution and impacts of aerosols on hurricanes.

This project is just starting but the hurricane season is already underway with the passage of Hurricane Arthur, which made landfall on the Outer Banks of North Carolina on July 4, 2014.  Our work began the following week with installation of our instrumentation aboard the NOAA WP-3D aircraft known as “Kermit” (the other operational WP-3D aircraft is called “Miss Piggy”).  Operating scientific instrumentation aboard airplanes requires a lot of planning and adherence to strict guidelines to ensure flight safety and collection of high-quality data.  Since we make measurements in-situ (by bringing ambient air inside the aircraft cabin), our goal is to design a system that routes aerosols into the cabin and to our instruments without losing particles along the way.  This involves a complex web of tubing, fittings, and cabling shown below. 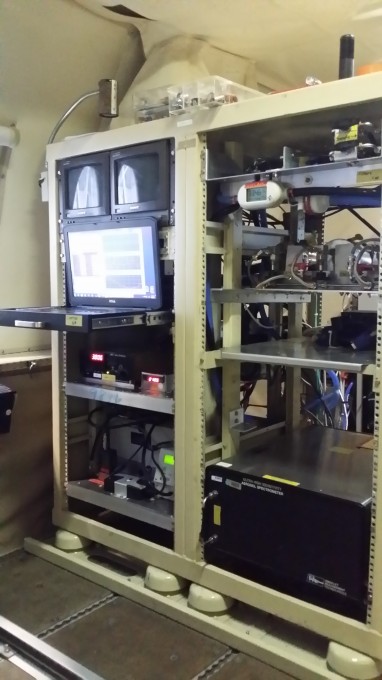 Front-view of the LARGE rack onboard the NOAA WP-3D aircraft. 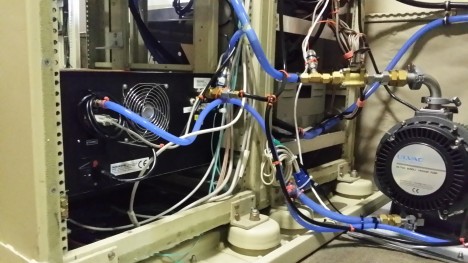 We still have work to do to complete our instrument integration, especially to install an aerosol inlet on the aircraft.  This will be completed soon and we will be poised to participate in the next hurricane flights!  Check back later for more details about our instrumentation, science objectives, and pictures from inside the next Atlantic hurricane…

More information on our research can be found at the links below:

We are finally looking at a dry spell weatherwise for the next several days.

The forecast is for clear weather (started yesterday) that should last through the coming week. PALS and UAVSAR had flights yesterday and today. Tomorrow (Sunday) there will be no flights, and then we plan to fly on Monday and then every third day or so following the 2-3 day flight schedule we originally planned. Over the week we should get a good sampling of the dry-down with both airborne and in situ observations across the experiment domain, modulated by the soil texture and vegetation differences between the fields. 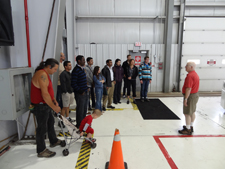 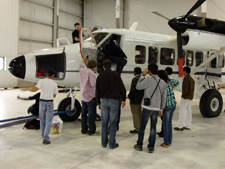 Cockpit entry is harder than it looks.

For more Open House pictures, visit the SMAP Blogs from the Field site.