There’re two instruments on the Beech King Air B200.  One is the HSRL, which stands for High Spectral Resolution LIDAR. The latter word is an acronym born out of the marriage between RADAR and LASER. Even Radiohead use it. The one mounted on the B200 is an advanced device that my colleagues at NASA Langley have been extensively deploying. It pulses a laser beam straight downwards, and records the time it takes for light to come straight back after it bounces off particles. Based on this information, the atmosphere below the airplane is profiled and the height of aerosols layers effectively located. 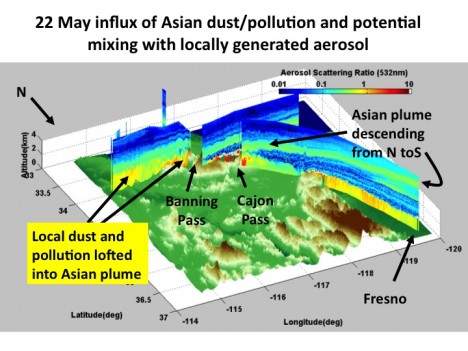 The Research Scanning Polarimeter (RSP) is somewhat weirder, as polarization is a kind of information that is greatly masked to humans’ vision capabilities. Ask bees. If you wear sunglasses though, you should know that they cut the glare because they filter out light waves oscillating in all directions other than that vibrating in a certain direction.

Light is a wave, but most instruments can only measure the amplitude (=intensity) of it. Instead, the RSP adds to it by recording at which angle the light wave vibrates. As you can expect, the change of this angle as a light wave scatters off a a particle is extremely sensitive to the size and shape of the particle. 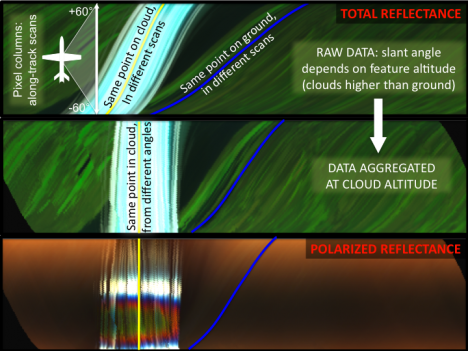 We hope we can exploit the synergy between these two instruments to nail the vertical distribution and nature of aerosols in the atmosphere. Our studies confirm the potential of integrating the information derived by the complementary capabilities of the two instruments, sort of “Tell me where you are, and I’ll tell you who you are”.

Why do we do this? These instruments are “the little brothers” of the CALIPSO LIDAR (already in space), and the polarimeter that will be launched onboard the Glory mission at the end of this year. These satellites will fly shoulder by shoulder (just a few seconds apart!), therefore observing at any instant the same scene. You can even have your name orbiting with us!

Today is a hard down day, long due after intense work around the aircraft and the two flights of yesterday. Things are definitely getting dirtier, and we started observing a decent amount of aerosols all along our flight trajectories.

I stitched this panorama of the McClellan airfield in between the two flights (2: 15 pm local time). On the extreme left, the tail of a 747, then that of a DC-8. Sometimes things just don’t fit right.

At right, the NASA King Air B-200 and the Department of Energy G-1 aircraft under careful maintenance of a member of the crew (“Wax on, wax off”). Note the sniffing tools (in gold color) close to the nose of the aircraft. Yummm…aerosols.

You can also see the presence of high cirrus clouds, not common in this season here in Sacramento. I’d much prefer not having them since they veil the Sun, which should instead shine unobstructed to guarantee a perfect interpretation of my polarimeter’s data (more about it in the next post).

There’s nothing special about Sacramento’s urban emissions per se, other than being very typical emissions from a city. So why was the campaign designed to take place here? The thing is that this region has a very well defined circulation pattern, which makes the plume transport very regular.

Southwesterly winds mix two airflows in the afternoon. The first is a persistent flow originating in the San Francisco Bay area.  The second is more local and due to air being heated up in the Sierras, which draws the cooler air from the valley. Unless — there is always an unless — the flow gets disrupted by synoptic (read: large scale) storms born in the Pacific. This is apparently what we have been observing in the first days of the campaign, doomed by an unusual amount of mid-level clouds. NASA’s instruments usually fly at around 8-9 km, and these clouds partly spoil our ability to observe aerosols beneath. 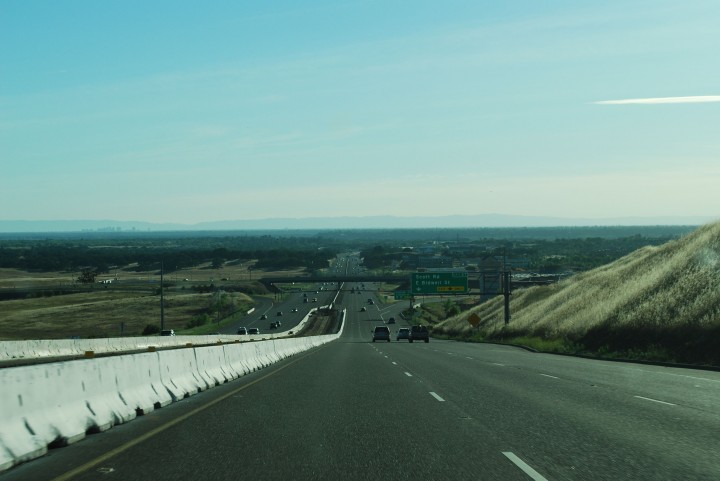 In any case, under normal conditions the resulting upslope flow transports the Sacramento’s plume towards the mountains, where anthropogenic aerosols interact with the biogenic sources from the forested areas, which are loaded with terpenes produced by the photosynthetic activity of vegetation. Recent research has shown that these biogenic sources could give an extra kick to the production of secondary organic aerosols of anthropogenic origin. “Secondary” here designates a zoo of different compounds generated by the interactions of “primary” substances with background conditions, leading to a myriad of chemical and physical transformations. An example? Humidity can coat aerosols of a thin film of water, drastically changing their properties.

The overall goal of the mission is to follow the evolution of the plume, sampling the formation of secondary organics and the anthropogenic/biogenic mixing ratio. Of great avail is the Cool “T1” site downwind from the sources here in Sacramento, packed with instrumentation on the ground managed by the Department of Energy. It’s Cool, like in Cool, CA. This nearly uninhabited site will be regularly overflown by the airplanes involved in the campaign so that data from the different platforms can be compared and validated. You can’t have ground sites everywhere, so that’s why the DOE G-1 airplane samples the area in between, trying to fill the gap and find out what happens in between. Plus there is us – the NASA group. We observe the same aerosols from high above, so we provide scene context. Our instruments are prototypes of those that fly on satellites in space, which are so very important because they give continuous global coverage via the “remote sensing” technique, or “the art of collecting data form a distance”. Very politically correct.

I have to thank Jerome Fast, who has extensive experience as chief meteorologist in campaigns like CARES, for his punctual forecast in the daily briefings and the explanations that prompted this post.

Flowers in your hair (and little aerosols in the air)

There’s always a lot of people thanking each other in a campaign, but today the crew, the pilots, and whoever up there is responsible for good weather deserves all my kudos. I normally don’t get to sit on the airplane, as our instrument works as a Swiss clock and we prefer to save fuel to pull longer flight legs. Today the circumstances were atypical and I got to board, curiously on the day of the one-year anniversary form my previous flight, during the RACORO campaign in Oklahoma.

Touristic companies would have a hard time to match the quality of this Tour of California (and I didn’t have to pay for it). I have to share these pictures, although their quality doesn’t speak enough of the true beauty of the sight. In my partial defense, I must say that the small B200 is extremely crammed and taking a good shot requires leaning over the pilots, which is not something you want to do too often (all other windows are partially darkened).

The route led us South of Sacramento along the San Joaquin valley, majestically shouldered by the Sierras still loaded with late spring snow. 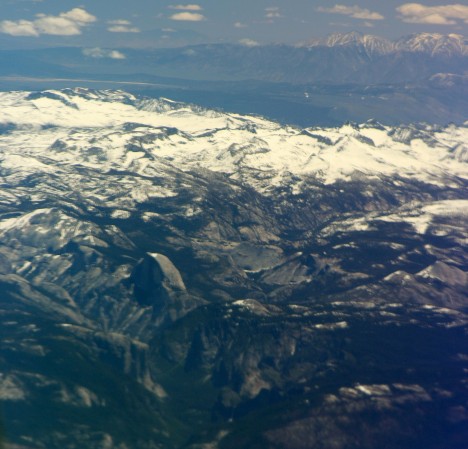 Fresno marked our big right turn toward the coast, right about when we spotted a small fire in the San Benito region. 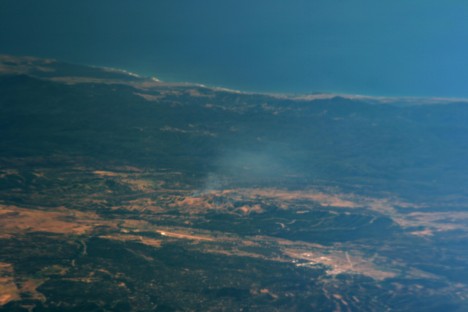 The flight plan required overpassing some ground stations at NASA Ames and in Monterey, so we were absolutely forced to come back along the Big Sur. Absolutely. It truly is a glorious coastline with surf clearly visible even from a 9km altitude. Cloud banks were innocuously looming from the ocean, a single tongue of fog daring to come further right there where it should be.

The final stretch was over the valleys of Napa and Sonoma, and shortly before touchdown over the only cloud bank the plane had to overfly.

I finally want to mention that yesterday was also “media” day. Here and here is what came out of it. By the way, if you happen to watch the videos, you should note that even if Rahul investigates scientific principles, that doesn’t make him a “principle investigator” as the banner reports. He’s the “principal investigator”. Don’t mean to brag too much about it, it’s just a matter of principle. Since we’re at it, measuring the composition of particles requires a “spectrometer” rather than an “aspectrometer”. Well, in a way we’re measuring the aspect of particles. 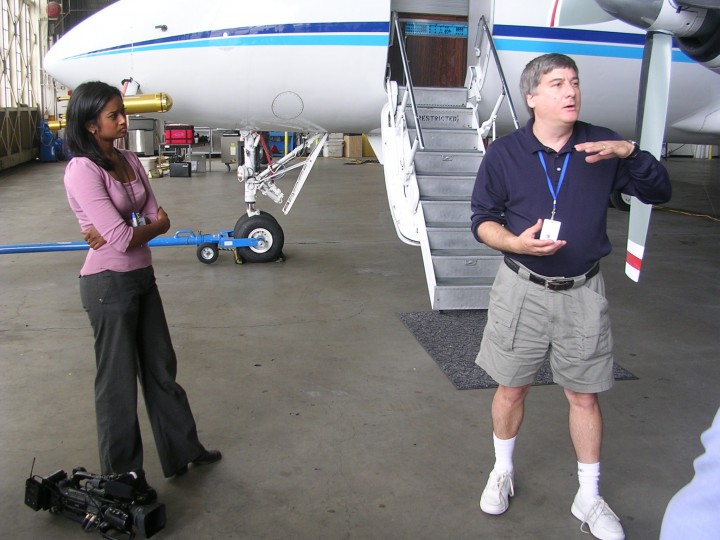 Normally, flight patterns are designed and effectuated based upon good scientific conditions. We must rely on the expertise of meteorologists who tell us if we are likely to fly with favorable weather. Instruments being all “go” is another fundamentally important factor (the first day we were grounded by power problems to one of the aircraft).  In campaigns like CARES, where day by day several airplanes coordinate their trajectories, even the crew rest days play a significant role. That is to say that it gets some time to get things rolling, especially in the beginning of a mission.

We managed to have our first flight yesterday. Even though the meteorological conditions haven’t been ideal so far (euphemism), having flown over R/V Atlantis was a notable achievement. The ship is owned by the United States Navy and  operated by the Woods Hole Oceanographic Institution,  and it navigated up the Sacramento River carrying many instruments to measure pollutants. Follow this link to find out the location of the ship, or this other one if you want to plot the data the ship is collecting in real time! 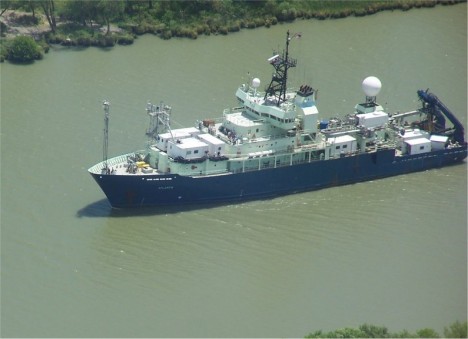 Today, the McClellan airfield is hosting the sorrow return of a military airplane carrying a victim from Afghanistan. Although eager to fly, in an almost silent debate we designated this as a “hard day down” before hand. That means no takeoff. One of the things you learn from the field: this is the real world.